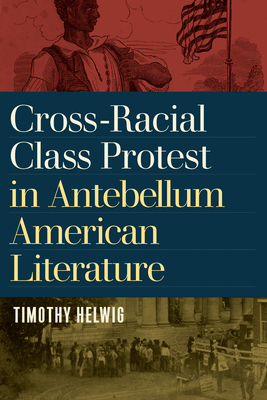 Historians have long claimed that the antebellum white working class viewed blacks, both free and enslaved, not as allies but enemies. While it is true that racial and ethnic strife among northern workers prevented an effective labor movement from materializing in America prior to the Civil War, Cross-Racial Class Protest in Antebellum American Literature demonstrates that a considerable subset of white and black writers were able to imagine cross-racial solidarity in the sensation novels and serial fiction, slave narratives, autobiographies, speeches, and newspaper editorials that they penned.

Timothy Helwig analyzes the shared strategies of class protest in popular and canonical texts from a range of antebellum white and black American authors, including George Lippard, Ned Buntline, Harry Hazel, Frederick Douglass, William Wells Brown, and Frank J. Webb. This pathbreaking study offers original perspectives on racial representations in antebellum American print culture and provides a new understanding of black and white authors’ strivings for socioeconomic justice across racial lines in the years leading up to the Civil War.

TIMOTHY HELWIG is professor of English at Western Illinois University.

"Helwig makes the case for the significance of a number of forgotten, ignored sensational novels, delivering an entirely fresh reading of the racial politics of antebellum sensationalism. Moreover, Helwig’s new book enriches our understanding of black-authored abolitionist writing: it makes visible another way in which this writing was enmeshed in the literary culture of its moment."—Joe Shapiro, author of The Illiberal Imagination: Class and the Rise of the U.S. Novel

"Well researched and written in clear prose, this book will reward any reader interested inthe ways in which race and class have intersected in US culture."—CHOICE