Prospects for Conservatives: A Compass for Rediscovering the Permanent Things (Paperback) 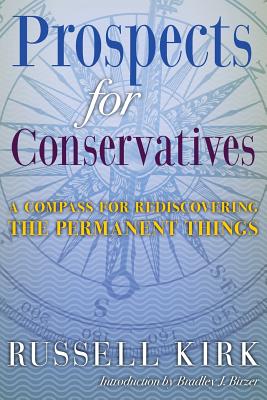 "The mind and heart of America, in this tremendous hour, require an inspiration which cannot come out of the party caucus and the editorial room of the daily newspaper." So writes Russell Kirk in Prospects for Conservatives. Sixty years hence the hour is late, the situation even more dire. Our governing elites, in all areas of social, political, and cultural life, have snapped the central axis of humanity and trampled upon the principles of natural, social, and transcendent order. But such are not ever lost, and it is these that Russell Kirk offers to us in this work--perhaps his best, in terms of style as well as intellectual depth and creativity, as Bradley Birzer notes in his introduction to this new edition.

As Dr. Birzer goes on to indicate, the book's importance lies less in the specific issues it addresses than in its discussion of eternal truths. In Prospects, the author engages problems of the intellect, community, justice, order, loyalty, tradition, and power; and associates each of these either with the seven classical and Christian virtues or with the seven deadly sins. Yes, the hour is late, but transcendent order can never be entirely extinguished, and its re-articulation in Prospects for Conservatives--bringing it into clear view so that it can affect everyday living--is an unexpected grace from the pen of Russell Kirk, given to all whose intellects and imaginations have not yet lost their bearings. In an age when it is all too easily led off course, Dr. Kirk offers American conservatism a sure way forward, and reason for hope in perilous times.