In a Day's Work: The Fight to End Sexual Violence Against America's Most Vulnerable Workers (Paperback) 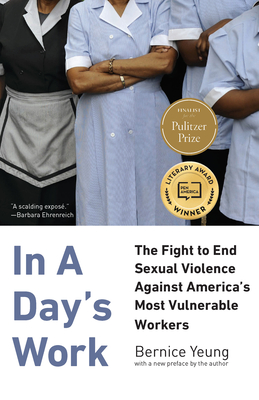 Apple orchards in bucolic Washington State. Office parks in Southern California under cover of night. The home of an elderly man in Miami. These are some of the workplaces where women have suffered brutal sexual assaults and shocking harassment at the hands of their employers, often with little or no official recourse. In this heartrending but ultimately inspiring tale, investigative journalist and Pulitzer Prize finalist Bernice Yeung exposes the epidemic of sexual violence levied against the low-wage workers largely overlooked by #MeToo, and charts their quest for justice.

In a Day's Work reveals the underbelly of hidden economies teeming with employers who are in the practice of taking advantage of immigrant women. But it also tells a timely story of resistance, introducing a group of courageous allies who challenge the status quo of violations alongside aggrieved workers--and win.

Bernice Yeung is an investigative journalist at ProPublica, and her work has appeared in the New York Times, PBS Frontline, New York magazine, and others. She lives in Berkeley, California.