From the Folks Who Brought You the Weekend: A Short, Illustrated History of Labor in the United States (Paperback) 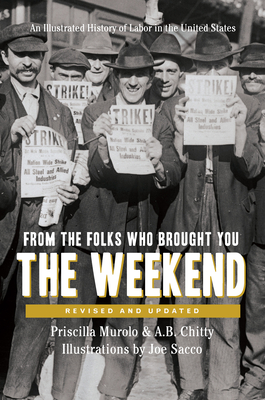 Hailed as a work of "impressive even-handedness and analytic acuity" (Publishers Weekly, starred review), From the Folks Who Brought You the Weekend has set the standard for viewing American history through the prism of working people. From indentured servants and slaves in seventeenth-century Chesapeake to high-tech workers in contemporary Silicon Valley, the book " puts] a human face on the people, places, events, and social conditions that have shaped the evolution of organized labor" (Library Journal), enlivened by numerous full-page illustrations throughout from the celebrated comics journalist Joe Sacco.

In this fully updated new edition, authors Priscilla Murolo and A.B. Chitty have added a wealth of fresh analysis of labor's role in American life, with new material on sex workers, disability issues, labor's relation to the global justice movement and the immigrants' rights movement, the 2005 split in the AFL-CIO and the movement civil wars that followed, and the crucial emergence of worker centers and their relationships to unions. With two entirely new chapters--one on global developments, from the movement of jobs offshore to the emergence of modern global union federations, and a second on the 2016 election and unions' relationships to Trump--From the Folks Who Brought You the Weekend will remain the standard, "comprehensive history of American labor" (The Washington Post).