The Edge of Everything (Paperback) 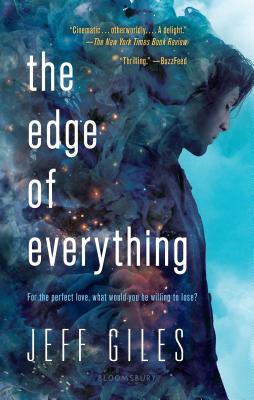 By Jeff Giles
Email or call for price.
Out of Print - Not Available

When their worlds collide, X and Zoe are pushed to the edge of everything in this much-buzzed-about tour de force fantasy from Entertainment Weekly veteran Jeff Giles.

For the perfect love, what would you be willing to lose?

It's been a shattering year for seventeen-year-old Zoe, who's still reeling from her father's shocking death in a caving accident and her neighbors' mysterious disappearance from their own home. Then on a terrifying subzero, blizzardy night in Montana, she and her brother are brutally attacked in the woods--only to be rescued by a mysterious bounty hunter they call X.

X is no ordinary bounty hunter. He is from a hell called the Lowlands, sent to claim the soul of Zoe's evil attacker and others like him. X is forbidden from revealing himself to anyone other than his prey, but he casts aside the Lowlands' rules for Zoe. As they learn more about their colliding worlds, they begin to question the past, their fate, and their future. But escaping the Lowlands and the ties that bind X might mean the ultimate sacrifice for them both.

Gripping and full of heart, this epic start to a new series will bring readers right to the edge of everything.

Jeff Giles grew up in Cohasset, Massachusetts. Most recently, he was the deputy managing editor of Entertainment Weekly, where he oversaw all coverage of movies and books, including the magazine's championing of YA fiction. Jeff has written for Rolling Stone and The New York Times Books Review. He also coauthored The Terrorist's Son, a nonfiction book that won an Alex Award from the American Library Association and has since been translated into more than a dozen languages. While reporting on the Lord of the Rings movies for Newsweek, Jeff was invited to be an extra in The Return of the King. He played a Rohan soldier, and--because he didn't have a beard or mustache--they glued yak hair to his face. Jeff lives with his family in Montana.

"A sharp fantasy thriller, and a dark one at that." - People

"An intriguing start to a new series." - Entertainment Weekly

"With imagination and verve, Giles delivers the goods required by the genre." - Time

"A rich and satisfying read on multiple levels." - Booklist

"Gripping. Utterly original. Beautifully written." - Peter Jackson, Oscar-winning director of The Lord of the Rings and The Hobbit trilogies

"A dark and suspenseful supernatural thriller that kept me up all night." - Melissa de la Cruz, #1 NEW YORK TIMES bestselling author of THE ISLE OF THE LOST

"Reads like a blend of J.R.R. Tolkien’s “The Lord of the Rings” and modern-day horror, such as Stranger Things."- School Library Journal

"An intriguing story that leaves the door open for future books." - Publishers Weekly

"Readers are advised to dive in now and revel in the star-crossed-lovers glory of it all." - BCCB

"Fantastical in nature, this story will keep readers interested until the very end." - School Library Connection