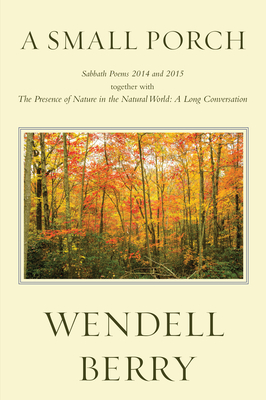 " Berry's poems] shine with a gentle wisdom of a craftsman who has thought deeply about the paradoxical strangeness and wonder of life." --The Christian Science Monitor

More than thirty-five years ago, Wendell Berry began spending his sabbaths outdoors, when the weather allowed, walking and wandering around familiar territory, seeking a deep intimacy only time could provide. These walks sometimes yielded poems. Each year since, he has completed a series of these poems dated by the year of its composition. This new sequence provides a virtual syllabus for all of Berry's cultural and agricultural work in concentrated form. Many of these poems, including a sequence at mid-year of 2014, were written on a small porch in the woods, a place of stillness and reflection, a vantage point of the one / life of the forest composed / of uncountable lives in countless / years, each life coherent itself within / the coherence, the great composure, of all. Recently Berry has been reflecting on more than a half century of reading, to discover and to delight in the poetical, spiritual, and cultural roots of his work. In The Presence of Nature in the Natural World, Berry's survey begins with Alan of Lille's twelfth-century work, The Plaint of Nature. From the Bible through Chaucer, from Milton to Pope, from Wordsworth to the moderns, Berry's close reading is exhilarating. Moving from the canon of poetry to the sayings and texts found in agricultutre and science, closely presented, we gain new appreciation for the complexity of the issues faced in the twenty-first century by the struggling community of humans on earth. With this long essay appended to these new Sabbath Poems, the result is an unusual book of depth and engagement. A new collection of Wendall Berry poems is always an occasion for celebration, and this eccentric gatheirng is especially so.

Wendell Berry is the author of fifty books of poetry, fiction, and essays. He was recently awarded the Cleanth Brooks Medal for Lifetime Achievement by the Fellowship of Southern Writers and the Louis Bromfield Society Award. For over forty years he has lived and farmed with his wife, Tanya, in Kentucky.