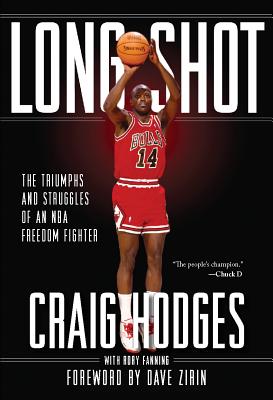 By Craig Hodges, Rory Fanning, Dave Zirin (Foreword by)
Email or call for price.
Out of Print - Not Available

As a member of the 1992 world-champion Chicago Bulls, a dashiki-clad Hodges delivered a handwritten letter to President George H. W. Bush demanding that he do more to address racism and economic inequality. Hodges was also a vocal union activist, initiated a boycott against Nike, and spoke out forcefully against police brutality in the wake of the Rodney King beating. But his outspokenness cost him dearly. In the prime of his career, after ten NBA seasons, Hodges was blackballed from the NBA for using his platform as a professional athlete to stand up for justice. In this powerful, passionate, and captivating memoir, Hodges shares the stories--including encounters with Nelson Mandela, Coretta Scott King, Jim Brown, R. Kelly, Michael Jordan, and others--from his lifelong fight for equality for African Americans.

Craig Hodges played in the NBA for ten seasons, in which he led the league in three-point shooting percentage three times. He won two NBA championships with the Chicago Bulls in 1991 and 1992, and is a three-time Three Point Contest champion at All-Star weekend. Rory Fanning walked across the United States for the Pat Tillman Foundation in 2008-2009, following two deployments to Afghanistan with the 2nd Army Ranger Battalion. He is the author of Worth Fighting For: An Army Ranger's Journey Out of the Military. Dave Zirin is the sports editor for the Nation and the author of Game Over: How Politics Has Turned the Sports World Upside Down. Named one of UTNE Reader's "Fifty Visionaries Who Are Changing Our World," Zirin is a frequent guest on MSNBC, ESPN, and Democracy Now! He hosts WPFW's The Collision with Etan Thomas and has been called "the best sportswriter in the United States," by Robert Lipsyte.