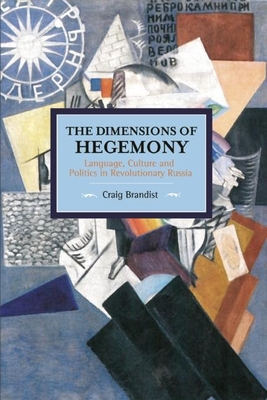 Though generally associated with Antonio Gramsci, the idea of hegemony played an essential role in revolutionary Russia where it was used to conceptualize the dynamics of political and cultural leadership. Drawing on extensive archival research, this study considers the cultural dimensions of hegemony through an examination of early soviet language policies and the debates that surrounded them. This unearthed history shows that considerations of relations between the proletariat and peasantry, the cities to the countryside, and the metropolitan center to the colonies of the Russian Empire demanded an intense dialogue between practical politics and theoretical reflections. It was this dialogue that led early Soviet thinkers to critical perspectives now assumed to be the achievement of sociolinguistics and post-colonial studies.

Craig Brandist is Professor of Cultural Theory and Intellectual History at the University of Sheffield, UK. His work has greatly extended Anglophone understandings of Soviet sociolinguistics, and includes major works on Bahktin, Vygotskii, and the Soviet critique of Eurocentrism