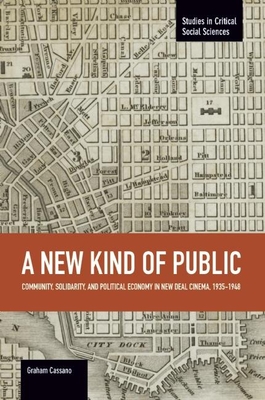 In 1936, director John Ford claimed to be making movies for "a new kind of public" that wanted more honest pictures. In this insightful and stimulating book Cassano argues that this new kind of public was forged in the fires of class struggle and economic calamity. Those struggles appeared in Hollywood productions, as the movies themselves tried to explain the causes and consequence of the Great Depression. Using the tools of critical Marxism and cultural theory, Cassano surveys Hollywood's political economic explanations and finds a field of symbolic struggle in which radical visions of solidarity and conflict competed with the dominant class ideology for the loyalty. of this new audience.

Graham Cassano is Associate Professor of Sociology at Oakland University, in Rochester, Michigan. He has published articles on a range of topics, including Thorstein Veblen's social theories, the sociology of American labor, and postmodern Marxian theory. He edited the volume, Class Struggle on the Homefront (Palgrave, 2010) and co-edited the volume, with Richard A. Dello Buono, Crisis, Politics, and Critical Sociology (Haymarket Book, 2010)