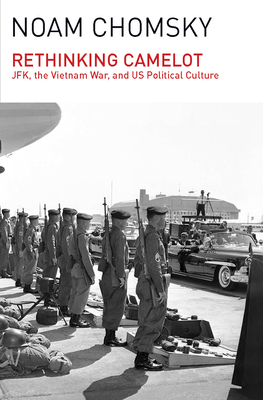 Rethinking Camelot is a thorough analysis of John F. Kennedy's role in the U/S. invasion of Vietnam and a probing reflection on the elite political culture that allowed and encouraged the Cold War. In it, Chomsky dismisses effort to resurrect Camelot--an attractive American myth portraying JFK as a shining knight promising peace, fooled only by assassins bent on stopping this lone hero who wold have unilaterally withdraws from Vietnam had he lived. Chomsky argues that U.S. institutions and political culture, not individual presidents, are the key to understanding U.S. behavior during Vietnam.

Noam Chomsky is Institute Professor (emeritus) in the Department of Linguistics and Philosophy at the Massachusetts Institute of Technology and Laureate Professor of Linguistics and Agnese Nelms Haury Chair in the Program in Environment and Social Justice at the University of Arizona. His work is widely credited with having revolutionized the field of modern linguistics.Chomsky is the author of numerous best-selling political works, which have been translated into scores of countries worldwide. Recent books include What Kind of Creatures Are We?, as well as Optimism and Despair, and Internationalism of Extinction.