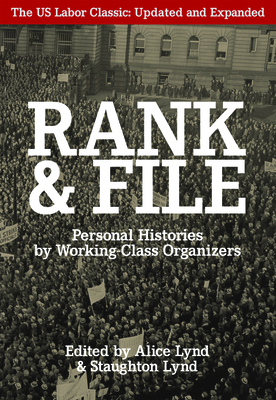 In this long-out-of-print oral history classic, Alice and Staughton Lynd chronicle the stories of more than two dozen working-class organizers who occupied factories, held sit-down strikes, walked out, picketed, and found other bold and innovative ways to fight for workers' rights. Rank and File brings the militancy of these firebrand organizers to life--whether it was in founding unions, challenging sexism and racism, safety violations, and management intimidation, or working for broader social changes.

Alice and Staughton Lynd Staughton Lynd was born in 1929 and grew up in New York City. His parents, Robert and Helen Lynd, co-authored the well-known Middletown books. Staughton went through the schools of the Ethical Culture Society. Above the auditorium of the main school were written the words: "The place where men meet to seek the highest is holy ground." Staughton Lynd received a BA from Harvard, an MA and PhD from Columbia, and a JD from the University of Chicago. He taught American history at Spelman College in Atlanta, where one of his students was the future Pulitzer Prize-winning novelist Alice Walker, and at Yale University. Staughton served as director of Freedom Schools in the Mississippi Summer Project of 1964. In April 1965, he chaired the first march against the Vietnam War in Washington DC. In August 1965, he was arrested together with Bob Moses and David Dellinger at the Assembly of Unrepresented People in Washington DC, where demonstrators sought to declare peace with the people of Vietnam on the steps of the Capitol. In December 1965, Staughton along with Tom Hayden and Herbert Aptheker made a controversial trip to Hanoi, hoping to clarify the peace terms of the Vietnamese government and the National Liberation Front of South Vietnam. Because of his advocacy and practice of civil disobedience, Lynd was unable to continue as a full-time history teacher. The history departments at five Chicago-area universities offered him positions, only to have the offers negatived by university or state administrators. In 1976, Staughton became a lawyer and until his retirement at the end of 1996 worked for Legal Services in Youngstown, Ohio. He specialized in employment law. When the steel mills in Youngstown were closed in 1977-1980 he served as lead counsel to the Ecumenical Coalition of the Mahoning Valley, which sought to reopen the mills under worker-community ownership, and brought the action Local 1330 v. U.S. Steel. After retiring, Staughton was for a time Local Education Coordinator for Teamsters Local 377 in Youngstown. Staughton Lynd and Alice Lee Niles met at Harvard Summer School. Alice's parents had recently become members of the Society of Friends, and Staughton had become aware of Quakerism through a cousin who served as an ambulance driver during World War II. Staughton and Alice were married at the Stony Run Meeting House in Baltimore in 1951. They have three children and seven grandchildren. In the early 1960s the Lynds became convinced Friends, and joined the Atlanta Friends Meeting. They are presently sojourning members of the 57th Street Meeting in Chicago. Alice was a member of a union of clerical workers in the 1950s, and a member of the Amalgamated Clothing Workers' Union in the 1970s. As a labor lawyer she helped visiting nurses to organize an independent union; assisted laid-off workers when they lost pension, health care and other benefits; filed occupational health and safety claims; and litigated employment discrimination cases. The Lynds have been deeply involved in opposing the death penalty, and in probing the cases of men sentenced to death or very long sentences for their alleged roles in a major prison riot in 1993. They were co-counsel in a major class action challenging conditions at Ohio's supermaximum security prison that went up to the United States Supreme Court, Wilkinson vs. Austin. This case, now being applied in other states, established procedural standards for placement and retention of prisoners in supermax prisons. Staughton Lynd has written or edited numerous books, including: Class Conflict, Slavery, and the United States Constitution (1967) and Intellectual Origins of American Radicalism (1968), re-issued by Cambridge University Press in 2009; with Michael Ferber, The Resistance (Beacon Press, 1971); Solidarity Unionism: Rebuilding the Labor Movement from Below (Charles H. Kerr, 1992); "We Are All Leaders" The Alternative Unionism of the Early 1930s (University of Illinois Press, 1996); Living Inside Our Hope: A Steadfast Radical's Thoughts on Rebuilding the Movement (Cornell University Press, 1997). Chapter Four of Living Inside Our Hope is an essay co-authored by Alice and Staughton called "Liberation Theology for Quakers," which first appeared as a Pendle Hill pamphlet; Lucasville: The Untold Story Of A Prison Uprising (Temple University Press, 2004); with Andrej Grubacic, Wobblies and Zapatistas: Conversations on Anarchism, Marxism and Radical History (PM Press, 2008); with Daniel Gross, Labor Law for the Rank & Filer: Building Solidarity While Staying Clear of the Law (PM Press, 2008); and From Here to There: The Lynd Reader (PM Press, 2010). Staughton and Alice Lynd have co-edited four books: Homeland: Oral Histories of Palestine and Palestinians (Olive Branch Press, 1994); Nonviolence in America: A Documentary History (Orbis Books, 1995); Rank and File: Personal Histories by Working-Class Organizers (Monthly Review Press, 1988); and The New Rank and File (Cornell University Press, 2000), which includes oral histories of labor activists in the past quarter century. Most recently, the Lynds have written Stepping Stones: Memoir of a Life Together, published in hardcover and paperback by Lexington Books in 2009.

One of the best works of oral history produced by radical historians. . . . For readers who want to see an alternative view to ocial trade union history, in which labor leaders take the center stage, Rank and File is the place to begin. ese personal histories of rank and le organizers show how ordinary working-class men and women made their own history.”
Nation

The stories, which are replete with heroism, double-dealing, hope, and su ering, make a vital contribution to an understanding of American labor’s struggle for recognition and united strength.”
Library Journal

A skillful compilation of interviews with working-class organizers . . . not just an oral history, but a chronicle of modern political events ignored in mainstream labor history and journalistic commentary. e value lies in what it will tell future generations about today.”
History Workshop Journal