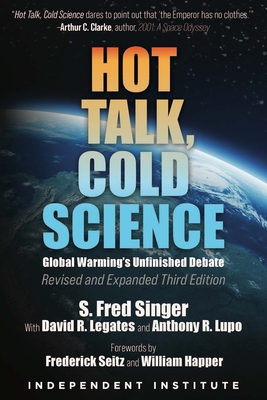 “In Hot Talk, Cold Science, Fred Singer looks at the issue of climate change the way a physicist should. He asks probing questions and offers reasoned possibilities. He notes the obvious weaknesses that others too often ignore…. Fortunately, some like Dr. Singer still prefer the joys and value of scientific inquiry.”
—Richard S. Lindzen, Alfred P. Sloan Professor Emeritus of Meteorology, M.I.T.

The revised and expanded third edition of Hot Talk, Cold Science forms the capstone of the distinguished astrophysicist Dr. S. Fred Singer’s lucid, yet hard scientific look at climate change. And the book is no less explosive than its predecessors—and certainly never more timely.

Singer explores the inaccuracies in historical climate data and the failures of climate models, as well as the impact of solar variability, clouds, ocean currents, and sea levels on global climate—plus factors that could mitigate any human impact on world climate.

Singer’s masterful analysis decisively shows that the pessimistic, and often alarming, global-warming scenarios depicted in the media have no scientific basis. In fact, he finds that many aspects of increased levels of CO2, as well as any modest warming, such as a longer growing seasons for food and a reduced need to use fossil fuels for heating, would have a highly positive impact on the human race.

As alarmists clamor to impose draconian government restrictions on entire populations in order to combat “climate change,” this book reveals some other startling, stubborn contradictory facts, including:

In sum, despite all the hot talk—and outright duplicity—there is no “climate crisis” resulting from human activities and no such threat on the horizon.

With the assistance of renowned climate scientists David R. Legates and Anthony R. Lupo, Singer’s Hot Talk, Cold Science is an essential, clear-headed book of scope and substance that no one who claims to value science, the environment, and human well-being can afford to ignore.

S. Fred Singer was one of the world’s preeminent authorities on energy and environmental issues. A pioneer in the development of rocket and satellite technology, Dr. Singer designed the first satellite instrument for measuring atmospheric ozone and was a principal developer of scientific and weather satellites. Author of more than 400 technical articles in scientific, economics, and public policy journals, plus more than 400 articles in popular publications, including the Wall Street Journal, New York Times, and the Washington Post, Dr. Singer received his Ph.D. in physics from Princeton University.

David R. Legates is a Research Fellow at the Independent Institute and Professor of Climatology in the Department of Geography and an Adjunct Professor in the Department of Applied Economics and Statistics at the University of Delaware. He is former Deputy Assistant Secretary of Commerce for Observation and Prediction and former Executive Director of the United States Global Change Research Program. His research has appeared in such scientific journals as the International Journal of Climatology, Journal of Geophysical Research, and Theoretical and Applied Climatology.

Anthony R. Lupo is a Research Fellow at the Independent Institute and Professor of Atmospheric Science and Principal Investigator of the Global Climate Change Group in the School of Natural Resources at the University of Missouri. He has been a Member of the Working Groups I and III for the Intergovernmental Panel on Climate Change (IPCC), and he is Associate Editor of the Monthly Weather Review. His peer-reviewed publications have appeared in such scientific journals as Bulletin of the American Meteorological Society, International Journal of Biometeorology, and International Journal of Climatology.

“As contentious as the climate issue was and is, I was always impressed by Fred Singer’s gentle demeanor within that storm. I suppose he remained calm because he sought to ground his views in the actual evidence of climate observations. In his day, reproducible evidence was the foundation on which one was taught to test one’s claims and he simply went about the business of checking out the latest theorized conjectures about the climate. Here in Hot Talk, Cold Science, he updates his findings regarding those conjectures, as well as giving a tour of the political landscape that melded itself to the climate-alarm agenda. His conclusions should give us all a modest sense of gentle calmness—that same calmness he carried to the end of his days.”
—John R. Christy, Director, Earth System Science Center, University of Alabama in Huntsville

“When debating environmental policy, we frequently hear from scientists, climate activists, and public officials who claim ‘the science is settled’ with regard to global warming. This book is a great reminder that the data are mixed at best. We should follow the science.Hot Talk, Cold Science provides the reader with important facts and evidence consistently and conveniently overlooked by climate alarmists, making clear the case on global warming is far from closed.”
—Ted Cruz, U. S. Senator; Chairman, Senate Subcommittee on Science and Space

“Drs. Singer, Legates, and Lupo bring science and reason to a debate that has increasingly been driven by panic and politics. Now more than ever, the public deserves Hot Talk, Cold Science’s thorough scientific and economic analysis of the realities of our environment.”
—Thomas M. McClintock, U.S. Congressman; Member, House Natural Resources Committee

“Drs. Singer, Legates, and Lupo uphold the vital method of scientific inquiry, which is the only way to improve the current, blurred description of the physical nature of the human impact on the terrestrial ecosystem. Nonetheless, the scientific questions about global warming are largely inseparable (properly so) from policy discussion. As Singer, Legates, and Lupo do, let’s keep the debate scientifically sound and enlightening.”
—Sallie L. Baliunas, former Staff Astrophysicist, Harvard-Smithsonian Center for Astrophysics