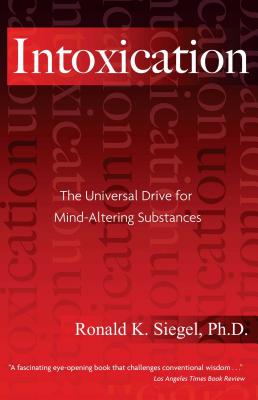 History shows that people have always used intoxicants. In every age, in every part of the world, people have pursued intoxication with plants, alcohol, and other mind-altering substances. In fact, this behavior has so much force and persistence that it functions much like our drives for food, sleep, and sex. This "fourth drive," says psychopharmacologist Ronald K. Siegel, is a natural part of our biology, creating the irrepressible demand for intoxicating substances.

In Intoxication Siegel draws upon his 20 years of groundbreaking research to provide countless examples of the intoxication urge in humans, animals, and even insects. The detailed observations of his so-called psychonauts--study participants trained to explicitly describe their drug experiences--as well as numerous studies with animals have helped him to identify the behavior patterns induced by different intoxicants. Presenting his conclusions on the biological as well as cultural reasons for the pursuit of intoxication and showing that personality and guidance often define the outcome of a drug experience, Siegel offers a broad understanding of the intoxication phenomenon as well as recommendations for curbing the negative aspects of drug use in Western culture by designing safe intoxicants.

Ronald K. Siegel, Ph.D. (1943-2019) was a psychopharmacologist on the faculty of the Department of Psychiatry and Biobehavioral Sciences at the UCLA School of Medicine and was a leading authority on the social and psychological effects of drug use. The author of Fire in the Brain and Whispers: The Voices of Paranoia, his research has also appeared in Psychology Today, Scientific American, and Omni as well as the Journal of the American Medical Association and the American Journal of Psychiatry.

"Siegal's book will be controversial, but his perspective on intoxication as a fact of nature and not just of culture cannot be ignored. Intoxication should be required reading for the nation's drug czar."
— Los Angeles Times Book Review

"[Ronald K. Siegal] knows more about how drugs work than anyone else alive. . .an intrepid researcher [and] cartographer of consciousness."
— Omni Magazine

"Siegal's book may draw spirited attacks. . .but his ideas are respected by drug authorities."
— Time

“Reading Intoxication one becomes conscious of the many different aspects of the drug problem, of the usefulness and dangers of psychoactive substances, and of their role and importance in medicine, in religious rituals, and in daily life. . . . Impressive . . . fascinating . . .”
— Albert Hofmann, Ph.D., author of LSD: My Problem Child and coauthor of Plants of the Gods

“Compelling . . . fact-packed. . . . The author carefully surrounds any potential pro-drug interpretation with ample (and graphic) examples of the dangers of drug abuse. . . . thought-provoking.”
— Booklist

"While carefully analyzing the human urge to seek out the effects of mind-altering substances, Siegal draws conclusions based on biological as well as cultural studies. . . .a very interesting and informative read."
— Vision Magazine, Oct 2005

"Presenting his conclusions on the biological as well as cultural reasons for the pursuit of intoxication, . . . Siegel offers a broad understanding of the intoxication phenomenon as wll as recommendations for curbing the negative aspects of drug use in Western culture by designing safe intoxicants."
— SirReadaLot.org

“This book will delight those who want to be informed, but not lectured, about drugs. . . . I recommend it based on its merits. It's objective, interesting and highly readable.”
— Galina Pembroke, New View, May 2006