Gobekli Tepe: Genesis of the Gods: The Temple of the Watchers and the Discovery of Eden (Paperback) 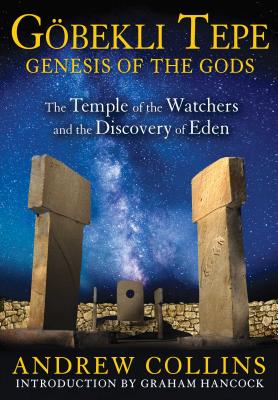 An exploration of the megalithic complex at Göbekli Tepe, who built it, and how it gave rise to legends regarding the foundations of civilization

• Details the layout, architecture, and exquisite carvings at Göbekli Tepe

Built at the end of the last ice age, the mysterious stone temple complex of Göbekli Tepe in Turkey is one of the greatest challenges to 21st century archaeology. As much as 7,000 years older than the Great Pyramid and Stonehenge, its strange buildings and rings of T-shaped monoliths--built with stones weighing from 10 to 15 tons--show a level of sophistication and artistic achievement unmatched until the rise of the great civilizations of the ancient world, Sumer, Egypt, and Babylon.

Chronicling his travels to Göbekli Tepe and surrounding sites, Andrew Collins details the layout, architecture, and exquisite relief carvings of ice age animals and human forms found at this 12,000-year-old megalithic complex, now recognized as the oldest stone architecture in the world. He explores how it was built as a reaction to a global cataclysm--the Great Flood in the Bible--and explains how it served as a gateway and map to the sky-world, the place of first creation, reached via a bright star in the constellation of Cygnus. He reveals those behind its construction as the Watchers of the Book of Enoch and the Anunnaki gods of Sumerian tradition.

Unveiling Göbekli Tepe’s foundational role in the rise of civilization, Collins shows how it is connected to humanity’s creation in the Garden of Eden and the secrets Adam passed to his son Seth, the founder of an angelic race called the Sethites. In his search for Adam’s legendary Cave of Treasures, the author discovers the Garden of Eden and the remains of the Tree of Life--in the same sacred region where Göbekli Tepe is being uncovered today.

Andrew Collins is a science and history writer, who has been investigating the origins of human civilization for over three decades. He is a noted explorer and the co-discoverer of a massive cave complex beneath the Giza plateau, now known as “Collins’ Caves.” He is the author of several bestselling books, including From the Ashes of Angels and Gobekli Tepe: Genesis of the Gods. He lives in southeast England.

“Andrew Collins has not only written the definitive explanation of Gobekli Tepe, but he has probably explained one of the most important mysteries of all time: Where and how did modern humans evolve? This is a masterpiece of work that brings ancient history to life.”
— Gregory Little, author of The Illustrated Encyclopedia of Native American Mounds & Earthworks and ed

“Here is an author to watch. Here is someone interested in the truth who will take us there at all costs.”
— Rand Flem-Ath, coauthor of Atlantis Beneath the Ice

“Göbekli Tepe: Genesis of the Gods by Andrew Collins is a comprehensive interpretation of the oldest advanced temple complex on Earth. Like Pompeii emerging from volcanic ash in 1599, Göbekli Tepe’s last moments were preserved by back-fill 10,000 years ago that totally preserved it as a museum of early prehistory. The extraordinary raised reliefs, pictograms, and pillars—many over twenty-feet tall and weighing many tons—tell the story of a forgotten culture from 11,500 years ago. World-renowned for his explorations of the prehistoric Middle East, Collins weaves together archeological, anthropological, astronomical, and spiritual aspects of Göbekli Tepe. His insights of Paleolithic sky-to-Earth cultic practices open our minds to Eden in the early Neolithic. In my own books, I have theorized that a series of cataclysms around 13,000 to11,500 years ago devastated Earth and traumatized our ancestors. Collin’s insights into this ancient site constructed by humans who were most likely recovering from post-cataclysmic trauma are compelling. This clear and correct interpretation of Göbekli Tepe offers even more! He draws our minds even deeper back 17,000 years to the Solutrean phase to describe human cultural development before the cultural regression. Göbekli Tepe awakens ancient memory to process deeply hidden trauma, from the past because it is a faithful and accurate depiction of the Paleolithic advanced culture. A must-read for anybody who wants to know the real story before “history” began.”
— Barbara Hand Clow, author of Awakening the Planetary Mind: Beyond the Trauma of the Past to a New Er