The German Ideology: Including Thesis on Feuerbach (Great Books in Philosophy) (Paperback) 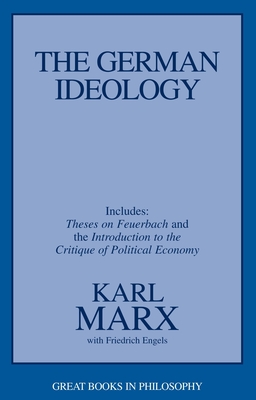 Nearly two years before his powerful Communist Manifesto, Marx (1818-1883) co-wrote The German Ideology in 1845 with friend and collaborator Friedrich Engels expounding a new political worldview, including positions on materialism, labor, production, alienation, the expansion of capitalism, class conflict, revolution, and eventually communism. They chart the course of "true" socialism based on Hegel's dialectic, while criticizing the ideas of Bruno Bauer, Max Stirner, and Ludwig Feuerbach. Marx expanded his criticism of the latter in his now famous Theses on Feuerbach, found after Marx's death and published by Engels in 1888. Introduction to the Critique of Political Economy, also found among the posthumous papers of Marx, is a fragment of an introduction to his main works. Combining these three works, this volume is essential for an understanding of Marxism.

KARL MARX was born in Trier, Prussia, on May 5, 1818, to an intellectual Jewish family. At seventeen he enrolled at the University of Bonn and a year later transferred to the University of Berlin where he became interested in the philosophy of G. W. F. Hegel. In 1841, Marx obtained his doctorate in philosophy, having presented a thesis on post-Aristotelian Greek philosophy.

As a young graduate deeply involved in the radical Hegelian movement, Marx found it difficult to secure a teaching post in the autocratic environment of Prussian society. In 1842 he became editor of the Cologne newspaper Rheinische Zeitung, but his probing eco­nomic critiques prompted the government to close the publication, whereupon Marx left for France.

While in Paris, Marx quickly became involved with emigre Ger­man workers and French socialists, and soon he was persuaded to the communist point of view. His first expression of these views oc­curred in the Economic and Philosophic Manuscripts of 1844, which remained unpublished until 1930. It was during this brief initial stay in France that Marx became associated with Friedrich Engels.

For his radical political activities, Marx was expelled from Paris toward the end of 1844. He moved, with Engels, to Brussels, where he was to remain for the next three years, except for occasional short trips to England. Here Marx wrote the manuscript for The German Ideology and the polemic The Poverty of Philosophy against idealistic socialism. Marx later joined the Communist League, a German workers group, for which he and Engels were to become the primary spokespersons. In 1847 Marx and Engels were asked to write a mani­festo for the league conference in London. This resulted in the creation of the Communist Manifesto, one of the most influential popular political documents ever written. Its publication coincided with a wave of revolutions in Europe in 1848.

Marx returned to Paris in 1848 but soon after left for Germany, where in Cologne he founded the Neue Rheinische Zeitung, a radical newspaper that attacked Prussian rule. As revolutionary fervor waned, the government suppressed his paper and Marx fled to England in 1849. For the next thirty-four years Marx remained in England ab­sorbed in his work. During this period he composed The Class Struggles in France (1848), The Eighteenth Brumaire of Louis Bonaparte (1948), Grundrisse (1858), Theories of Surplus Value (1860), Das Kapital (Vol. 1, 1867), and The Civil War in France (1871). Karl Marx died in London on March 13, 1883.

FRIEDRICH ENGELS was born in Barmen, Prussia, on November 28, 1820. His father was a very wealthy textile manufacturer who owned cotton mills in both Germany and England. Engels met Karl Marx in Paris in 1844 and soon discovered that they shared similar socialist views. During Marx's lifetime, the two collaborated on a great many projects. After Marx's death, Engels completed the last two volumes of Das Kapital and continued to defend Marxist views.
In addition to Engels's coauthorship of the Communist Manifesto, he produced a substantial amount of independent work: Conditions of the Working Class in England (1845), Anti-Duehring (1878), and The Origin of the Family, Private Property and the State (1884). Friedrich Engels died in London on August 5, 1895.