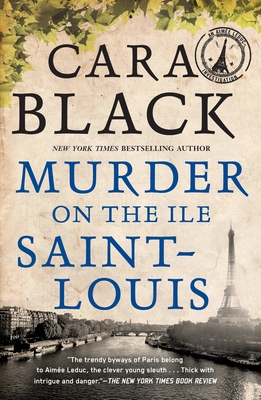 This is book number 7 in the An Aimée Leduc Investigation series.

Parisian P.I. Aimée Leduc finds herself caring for an abandoned infant while trying to track down the child’s missing mother

Aimée Leduc is on a tight work deadline when an anonymous call leads her to an abandoned infant in her building's courtyard. Aimée's search for little Stella's mother that will soon have her on the run from a cold-hearted killer and embroiled in a conflict between oil tycoons and environmental protesters.

Parisian private investigator Aimée Leduc is working on a tight deadline for a cybersecurity contract when she gets a phone call that disrupts all her progress. The female voice on the other end begs Aimée to go out into her courtyard, insists that her life is in danger, that Aimée must not call the police, then hangs up. Aimée’s project is in jeopardy, and her partner, René, will be furious if she botches this assignment, but she can’t ignore the distress in the mysterious caller’s voice. That doesn’t mean she’s prepared for what she finds in the courtyard, though: a newborn baby, wrapped in a blood-stained beaded jacket.

Aimée wants to track down the baby’s mother, but when a young woman’s body washes up in the Seine on the shores of the Ile Saint-Louis, the little island where Aimée herself lives, she realizes the situation is very dangerous. Paris has been rife with bomb threats linked to protesting environmental groups, and with a little investigating Aimée becomes convinced the baby, the body in the Seine, and the protests are somehow linked. Not that Aimée can afford distraction from her paying work right now--Leduc Detective is in bad financial straits. But despite themselves, Aimée and René have both fallen in love with the baby girl, whom Aimee nicknames Stella. Taking care of Stella’s needs—and protecting her from whoever hurt or killed her missing mother—must take priority over their computer security contract with a big publicity firm. Meanwhile, she’s following leads to the infant’s mother that take her to a radical dispossessed Polish prince, a community of homeless people who live in the sewer caves of the Seine, and a sexy documentary film maker. Can Aimée finish her security job, figure out who Stella belongs to, track down the missing mother, and protect herself and her friends from the danger that is circling them, all while juggling a newborn infant?

Cara Black is the author of sixteen books in the New York Times bestselling Aimée Leduc series. She lives in San Francisco with her husband and visits Paris frequently.

Praise for Murder on the Ile Saint-Louis

"This very dark Euro-thriller will have you wondering if it's not too late to book that summer vacation to Paris you always wanted. If time and money are stopping you, reading Murder on the Ile Saint-Louis may be a smart alternative."
—USA Today

"Now that every other mainstream mystery seems awash in gory religious rituals, it has fallen to independent publishers to keep a fresh perspective on the genre. Soho Press, one of the more enterprising of these small houses, has a keen nose for offbeat detectives who ply their trade in foreign locales. The trendy byways of Paris belong to Aimée Leduc, the clever young sleuth in a winning series by Cara Black . . . The energetic plot is thick with intrigue and danger."
—The New York Times Book Review

Praise for the Aimée Leduc series

"This very dark Euro-thriller will have you wondering if it's not too late to book that summer vacation to Paris you always wanted. If time and money are stopping you, reading Murder on the Ile Saint-Louis may be a smart alternative."
—USA Today

“One of the best heroines in crime fiction.”
—Lee Child

“She makes Paris come alive as no one else has since Georges Simenon.”
—Stuart Kaminsky

“If you’ve never been to Paris, or you’d like to go back soon, let Cara Black
transport you there.”
—Linda Fairstein

“One of the best new writers in the field today.”
—Publishers Weekly, Starred Review