Power Play: The Fight to Control the World's Electricity (Hardcover) 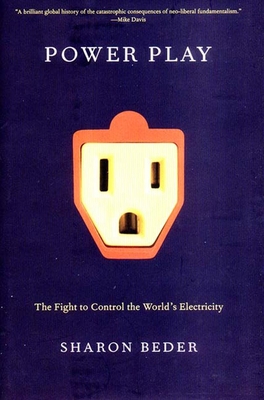 As electrification spread across America in the early twentieth century, private corporations moved quickly to reap unprecedented profits from millions of new paying customers. Blocking their path was the widespread view that electricity was a basic need and that its production should be regulated--if not owned outright--by the public. The electricity companies fought back, buying up newspapers, radio stations, and politicians, and flooding the schools with free, pro-industry schoolbooks. Their actions heralded the advent of corporate public relations, and form a major chapter in the history of the industry.

In an eye-opening investigation, Sharon Beder's Power Play reveals the decades-long struggle to wrest control of electricity from public hands. Her analysis ranges from the machinations of American political power to grassroots struggles in South Asia aimed at stemming the environmental degradation caused by multinational energy providers. In so doing, she sets the stage for understanding the damage done by deregulation, the roots of the Enron scandal, and the contemporary debacle of electricity supply.

Sharon Beder is the author of numerous books, including Global Spin, Selling the Work Ethic, and The Nature of Sustainable Development. She is currently associate professor at the University of Wollongong, Australia.