No Place to Go: How Public Toilets Fail Our Private Needs (Paperback) 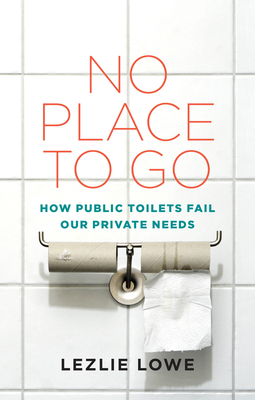 Adults don't talk about the business of doing our business. We work on one assumption: the world of public bathrooms is problem- and politics-free. No Place To Go reveals the opposite is true.
No Place To Go is a toilet tour from London to San Francisco to Toronto and beyond. From pay potties to deserted alleyways, No Place To Go is a marriage of urbanism, social narrative, and pop culture that shows the ways -- momentous and mockable -- public bathrooms just don't work. Like, for the homeless, who, faced with no place to go sometimes literally take to the streets. (Ever heard of a municipal poop map?) For people with invisible disabilities, such as Crohn's disease, who stay home rather than risk soiling themselves on public transit routes. For girls who quit sports teams because they don't want to run to the edge of the pitch to pee. Celebrities like Lady Gaga and Bruce Springsteen have protested bathroom bills that will stomp on the rights of transpeople. And where was Hillary Clinton after she arrived back to the stage late after the first commercial break of the live-televised Democratic leadership debate in December 2015? Stuck in a queue for the women's bathroom.
Peel back the layers on public bathrooms and it's clear many more people want for good access than have it. Public bathroom access is about cities, society, design, movement, and equity. The real question is: Why are public toilets so crappy?

Lezlie Lowe is a freelance journalist and journalism instructor based in Halifax, Nova Scotia. She has been recognized for her long-form journalism by the Canadian Association of Journalists and the Atlantic Journalism Awards. She holds an MFA in Creative Nonfiction from the University of King's College, where she also teaches in the Journalism department. No Place To Gois her first book.