Friends from the Beginning: The Berkeley Village That Raised Kamala and Me (Hardcover) 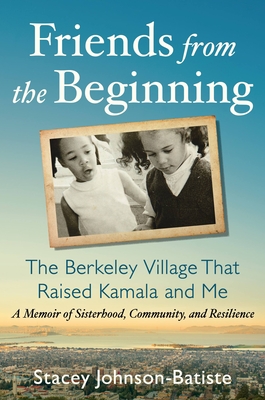 A vivid, intimate portrait of the friendship forged between Stacey Johnson Batiste and her childhood best friend, Vice President Kamala Harris—and of the community in which they were raised, and the lessons offered by those they loved and admired from childhood, through their teenage years, and up to the present day.

Stacey Johnson-Batiste is a National Sales Channel Manager at AT&T. She received her Bachelor of Science degree in Organizational Behavior from the University of San Francisco and was an honoree featured in CRNMagazine’s "The Power 100: The Most Powerful Women in the Channel" in 2018. Stacey is a loving mother to a daughter, son, and two granddaughters. She is passionate about the protection of animals and the preservation of wildlife.  Her hobbies include designing and sewing clothes, golfing, gardening, fitness, and catching up with life-long friends.

“It’s my honor to have known Stacey and her family (Robert, Doris, and Ronny) since Stacey was a young girl in Berkeley. FRIENDS FROM THE BEGINNING is an articulate, heartfelt story about Stacey and Kamala Harris from their childhood to adulthood. What a role model for generations to come!”—Eddie Henderson

"It indeed takes a village, and Stacey Johnson-Batiste's memoir of her coming of age with Kamala Harris in the 'Berkeley Village' of the sixties and seventies is a poignant, engaging look at the characters and the inclusive, progressive environment that shaped them both. Johnson-Batiste—whom Harris calls her 'best friend for life, from the beginning'—provides a unique window into the formative influences that shaped the nation's first female, first Black, and first Asian American vice president."—Jackie Calmes, Los Angeles Times national columnist and author of DISSENT: The Radicalization of the Republican Party and Its Capture of the Court

"A tender look at the author’s lifelong friendship with Kamala Harris, FRIENDS FROM THE BEGINNING is an earnest and affecting love letter to the girl who grew up to be vice president and the neighborhood of families who helped raised her."

“An affectionate homage to a treasured friend.”—Kirkus