The Rage of Innocence: How America Criminalizes Black Youth (Hardcover) 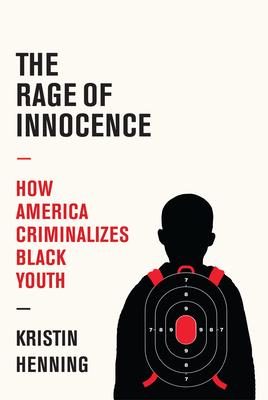 A brilliant analysis of the foundations of racist policing in America: the day-to-day brutalities, largely hidden from public view, endured by Black youth growing up under constant police surveillance and the persistent threat of physical and psychological abuse

Henning explains how discriminatory and aggressive policing has socialized a generation of Black teenagers to fear, resent, and resist the police, and she details the long-term consequences of rac­ism that they experience at the hands of the police and their vigilante surrogates. She makes clear that unlike White youth, who are afforded the freedom to test boundaries, experiment with sex and drugs, and figure out who they are and who they want to be, Black youth are seen as a threat to White Amer­ica and are denied healthy adolescent development. She examines the criminalization of Black adoles­cent play and sexuality, and of Black fashion, hair, and music. She limns the effects of police presence in schools and the depth of police-induced trauma in Black adolescents.

Especially in the wake of the recent unprece­dented, worldwide outrage at racial injustice and inequality, The Rage of Innocence is an essential book for our moment.

KRISTIN HENNING is a nationally recognized trainer and consultant on the intersection of race, adolescence, and policing. She is the Blume Professor of Law and director of the Juvenile Justice Clinic and Initiative at the Georgetown University Law Center; from 1998 to 2001 she was the lead attorney of the Juvenile Unit at the Public Defender Service for the District of Columbia. Awards she has received include the 2021 Leadership Prize from the Juvenile Law Center and the 2013 Robert E. Shepherd, Jr. Award for Excellence in Juvenile Defense from the National Juvenile Defender Center.

“The Rage of Innocence is reminiscent of Michelle Alexander’s The New Jim Crow and James Forman Jr.’s Locking Up Our Own . . .  A serious and thoughtful book about a subject of great importance, and it deserves to be widely read . . . Henning believes in the redemptive power of storytelling. It’s storytelling that can make people understand the racial inequities of the legal system, and it’s storytelling that can restore the humanity this system has cruelly stripped from its victims.”
—New York Times Book Review

“We’ve long needed a great book on race and the juvenile legal system. Thanks to Kris Henning, we have it. Deeply researched and passionately argued, The Rage of Innocence details how we criminalize Black children—and explains how we can stop.”
—James Forman, Jr., J. Skelly Wright Professor of Law, Yale Law School, and Pulitzer-prize winning author of Locking Up Our Own

“Henning’s vividly told stories, meticulous research, and trenchant analysis teach us just how widespread the pernicious mistreatment of children of color in contemporary America is—not just on the streets, but in our schools, courts, and social institutions. The Rage of Innocence is much, much more than a compelling and timely indictment of our justice system. It is a deeply disturbing look at what it means to grow up as a Black child in a society that fears, vilifies, and demonizes young people simply because of the color of their skin.”
—Laurence Steinberg, Distinguished University Professor of Psychology, Temple University, and former director of the MacArthur Foundation Research Network on Adolescent Development and Juvenile Justice.

“A vivid and enraging account of how Black children don’t get to be children in the eyes of police, politicians, and sometimes their own teachers. Henning, a star defense attorney and law professor, tells stories—in and out of school—of how the new Jim Crow targets Black boys and girls and tears apart families. Lucid analysis from a brilliant scholar at the top of her game, The Rage of Innocence blesses readers with common sense solutions that provide hope that we can do better for our children and our democracy.”
—Paul Butler, Albert Brick Professor in Law, Georgetown University, and author of Chokehold: Policing Black Men

"It offers both a tribute to the humanity of Black children and a searing portrait of what we lose every time we shuttle another Black child into the pipeline."
—Washington Post