Islands of Heritage: Conservation and Transformation in Yemen (Paperback) 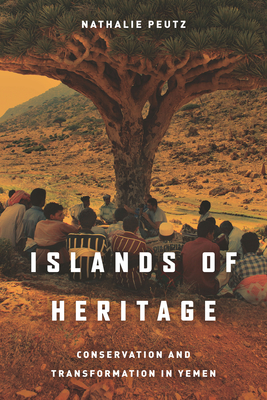 Soqotra, the largest island of Yemen's Soqotra Archipelago, is one of the most uniquely diverse places in the world. A UNESCO natural World Heritage Site, the island is home not only to birds, reptiles, and plants found nowhere else on earth, but also to a rich cultural history and the endangered Soqotri language. Within the span of a decade, this Indian Ocean archipelago went from being among the most marginalized regions of Yemen to promoted for its outstanding global value. Islands of Heritage shares Soqotrans' stories to offer the first exploration of environmental conservation, heritage production, and development in an Arab state.

Examining the multiple notions of heritage in play for twenty-first century Soqotra, Nathalie Peutz narrates how everyday Soqotrans came to assemble, defend, and mobilize their cultural and linguistic heritage. These efforts, which diverged from outsiders' focus on the island's natural heritage, ultimately added to Soqotrans' calls for political and cultural change during the Yemeni Revolution. Islands of Heritage shows that far from being merely a conservative endeavor, the protection of heritage can have profoundly transformative, even revolutionary effects. Grassroots claims to heritage can be a potent form of political engagement with the most imminent concerns of the present: human rights, globalization, democracy, and sustainability.