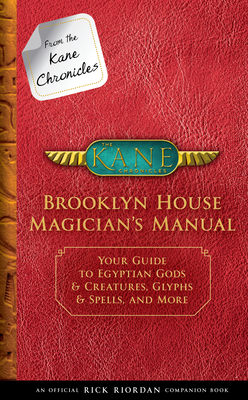 A playful guide to Ancient Egyptian deities and creatures as well as Carter and Sadie Kane's world of magic.
Greetings, initiate! Carter Kane, here. Congratulations on reaching Brooklyn House in one piece. This accomplishment signals that you're descended from Ancient Egyptian royalty, and you have magic powers. But what good is power without knowing how to use it? That's where this training manual comes in.
Packed with quizzes, stories, and insights about Ancient Egyptian deities, creatures (the friendly and the deadly), the mysterious Duat, and more, this primer will prime those with the blood of the pharaohs to take their first steps down the path of the gods. You'll hear from me, other magicians (including my sister, Sadie), and even a few of the gods themselves. But beware of tricks and surprises: anything can happen in the world of Egyptian magic.

Rick Riordan, dubbed "storyteller of the gods" by Publishers Weekly, is the author of five #1 New York Times best-selling middle grade series with millions of copies sold throughout the world: Percy Jackson and the Olympians, The Heroes of Olympus, and the Trials of Apollo, based on Greek and Roman mythology; the Kane Chronicles, based on Ancient Egyptian mythology; and Magnus Chase and the Gods of Asgard, based on Norse mythology. Rick collaborated with illustrator John Rocco on two #1 New York Times best-selling collections of Greek myths for the whole family: Percy Jackson's Greek Gods and Percy Jackson's Greek Heroes. Rick is also the publisher of an imprint at Disney-Hyperion, Rick Riordan Presents, dedicated to finding other authors of highly entertaining fiction based on world cultures and mythologies. He lives in Boston, Massachusetts with his wife and two sons. Follow him on Twitter at @camphalfblood.