Tales from the Haunted Mansion: Volume I: The Fearsome Foursome (Hardcover) 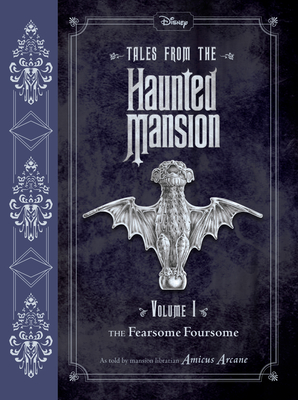 Welcome, foolish mortals, to the spookiest chapter book series yet: Tales from the Haunted Mansion!
Based on the attractions from the Disney Parks, each new book tells the story of one of the Haunted Mansion's 999 ghosts. With eerie illustrations throughout and a beautiful three-piece cloth cover, the books are designed to look like they came straight from the library in the Haunted Mansion.
Tales from the Haunted Mansion is a fun, spooky ride, just like the attraction from the Disney Parks. And if readers are familiar with the ride, they'll see elements of it throughout the entire story, from items straight of the Mansion (are those pictures stretching?) to lyrics from the narration that is heard in each Doom Buggy.
In this bone-chilling book, you will hear the terrifying tales of the Fearsome Foursome--four kids who look to out-scare each other. But just wait until they hear my spooky stories. Who am I? I am Amicus Arcane, your librarian and host. Your Ghost Host. So read on... if you dare!

Amicus Arcane:Little is known about the dearly departed Amicus Arcane, save for his love of books. As the mansion librarian, both in this life and the afterlife, Amicus has delighted in all forms of the written word. However, this librarian's favorite tales are those of terror and suspense. After all, there is nothing better to ease a restless spirit than a frighteningly good ghost story.
John Esposito:When John Esposito met Amicus Arcane on a midnight stroll through New Orleans Square, he was so haunted by the librarian's tales that he decided to transcribe them for posterity. John has worked in both film and television, on projects such as R.L. Stan's The Haunting Hour, Teen Titans, and the webisodes for The Walking Dead, for which he won consecutive Writer's Guide Awards. John lives in New York with his wife and children, and still visits with Amicus from time to time.

Kelley Jones:For the illustrations accompanying his terrifying tales, Amicus Arcane approached Kelley Jones, an artist with a scary amount of talent. Kelley has worked for every major comic book publisher but is best known for his definitive work on Batman for DC Comics. Kelley lives in Northern California with his wife and children and hears from Amicus every October 31st, whether he wants to or not.

Gr 4-7 Middle schoolers Willa, Tim, Noah, and Steve bond over their love of horror and form The Fearsome Foursome, their storytelling club. They meet weekly to share tales of ghosts and ghouls. One day, their headquarters gets demolished in a freakish storm. In the wreckage, the quartet find four fancy invitations to an address on the other side of town. Intrigued, they find it's a Gothic mansion, which seems deserted except for the librarian, who is the keeper of all scary stories. It turns out the librarian has a story to read about each of them, and he insists they will be dying to find out how these tales end. This is the first in a new series based on the Disney theme park ride the Haunted Mansion. The selections are gruesome-some include rotting corpses-but are not too frightening for most middle grade readers. VERDICT An excellent addition for freshening up scary stories collections; hand this to fans who have graduated from "Goosebumps" or are looking for a new scare.
—School Library Journal, Beth Cuddy, Seward Elementary School, NY

Middle-graders Willa, Tim, Noah, and Steve, the titular Fearsome Foursome, share a love of scary stories, so when they receive a mysterious invitation to meet in a haunted mansion on the other side of town, there's no doubt that the friends will be going. The house is a little unnerving, sure, with ravens cawing overhead, a gothic fa ade, even a pet cemetery to complete the picture, but the kids shrug off the obvious and most likely manufactured forbidding atmosphere; inside, they're mostly skeptical and only slightly frightened when they meet the house's skeletal-like librarian. After betting him that he can't possibly come up with a story that actually scares the group, they grow increasingly terrified as he tells the story of each kid's demise. But of course, it's all fun and games, right? Right? The librarian acts as the book's cheeky (and creepy) narrator, inserting humorous asides that poke fun at typical horror-story tropes. These get old pretty quickly, but the stories themselves are scary on an R. L. Stine level, with just the right number of chills and the right amount of gore, and the episodic nature of the tales makes the book accessible as well as appealing. This is right up the alley of reluctant readers who like a good thrill but not a hefty page count, and it's certainly fodder for campfire storytelling.
—Bulletin of the Center for Children?s Books, KQG