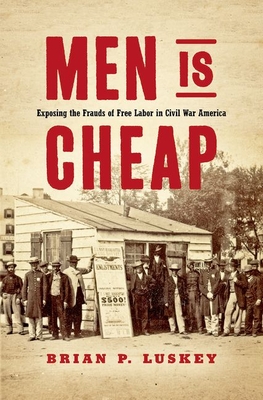 When a Civil War substitute broker told business associates that Men is cheep here to Day, he exposed an unsettling contradiction at the heart of the Union's war effort. Despite Northerners' devotion to the principles of free labor, the war produced rampant speculation and coercive labor arrangements that many Americans labeled fraudulent. Debates about this contradiction focused on employment agencies called intelligence offices, institutions of dubious character that nevertheless served the military and domestic necessities of the Union army and Northern households. Northerners condemned labor agents for pocketing fees above and beyond contracts for wages between employers and employees. Yet the transactions these middlemen brokered with vulnerable Irish immigrants, Union soldiers and veterans, former slaves, and Confederate deserters defined the limits of independence in the wage labor economy and clarified who could prosper in it.

Men Is Cheap shows that in the process of winning the war, Northerners were forced to grapple with the frauds of free labor. Labor brokers, by helping to staff the Union military and Yankee households, did indispensable work that helped the Northern state and Northern employers emerge victorious. They also gave rise to an economic and political system that enriched the managerial class at the expense of laborers--a reality that resonates to this day.