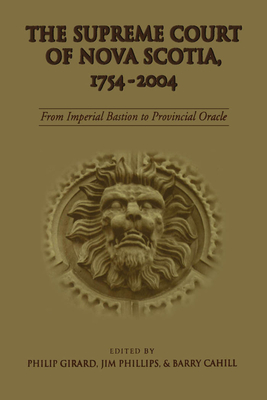 Prepared to coincide with the 250th anniversary of the establishment of Nova Scotia's Supreme Court, this important new volume provides a comprehensive history of the institution, Canada's oldest common law court. The thirteen essays include an account of the first meeting in 1754 of the court in Michaelmas Term, surveys of jurisprudence (the court's early federalism cases; its use of American law; attitudes to the administrative state), and chapters on the courts of Westminster Hall, on which the Supreme Court was modelled, and the various courthouses it has occupied. Anchoring the volume are two longer chapters, one on the pre-confederation period and one on the modern period.

Editors Philip Girard, Jim Phillips, and Barry Cahill have put together the first complete history of any Canadian provincial superior court. All of the essays are original, and many offer new interpretations of familiar themes in Canadian legal history. They take the reader through the establishment of the one-judge court to the present day - a unique contribution to our understanding of superior courts.