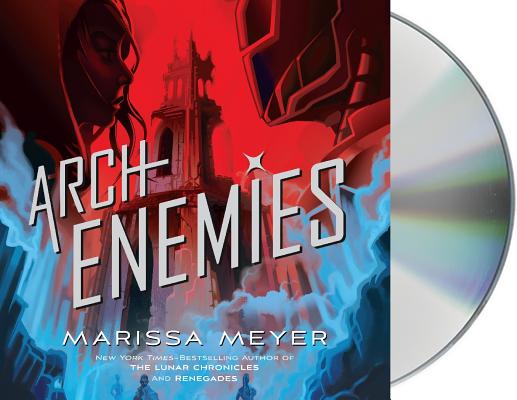 This is book number 2 in the Renegades series.

The Renegades Trilogy continues, in this fiercely awaited second installment after the New York Times-bestselling Renegades by Marissa Meyer, author of the Lunar Chronicles.

Time is running out.
Together, they can save the world.
But they each other’s worst nightmare.

Nova’s double life is about to get a lot more complicated:

As Insomnia, she is a full-fledged member of the Renegades, a syndicate of powerful and beloved superheroes. She works with Adrian’s patrol unit to protect the weak and maintain order in Gatlon City.

As Nightmare, she is an Anarchist - a group of of villains who are determined to destroy the Renegades. Nova wants vengeance against the so-called heroes who once failed her when she needed them most.

But as Nova, her feelings for Adrian are deepening, despite the fact that he is the son of her sworn enemies and, unbeknownst to Nova, he has some dangerous secrets of his own.

In this second installment of the Renegades trilogy, Nova, Adrian, and the rest of their crew – Ruby, Oscar, and Danna -- are faced with escalating crime in Gatlon City, while covert weapons and conflicting missions have Nova and Adrian questioning not only their beliefs about justice, but also the feelings they have for each other.

The line between good and evil has been blurred, but what's clear to them both is that too much power could mean the end of their city – and the world – as they know it.

Marissa Meyer's first book in the Lunar Chronicles, Cinder, debuted on the New York Times bestseller list. Marissa lives in Tacoma, Washington, with her husband and their three cats.

Dan Bittner has narrated dozens of audio books and has starred on stage and on the screen, in movies such as Men in Black, Adventureland, and the Producers: The Movie Musical. He has also appeared onstage as Macbeth Malcolm and Sherlock Holmes in the Edinburgh Fringe Festival. He has narrated popular audio books such as The Eleventh Plague, Hero, and Forever.

Rebecca Soler is a film and voiceover actress who won a 2009 AudioFile Earphones Award for her narration of After by Amy Efaw. Her audiobook credits include work by authors such as Judy Blume, James Patterson and Sarah Dessen. Soler has also narrated the popular young adult series The Lunar Chronicles by Marissa Meyer. Her voice over credits include various video games, like Star Wars: The Old Republic and Red Dead Redemption and television shows such as Pokemon, Yu-Gi-Oh, and Teenage Mutant Ninja Turtles. She lives in New York City.

"Listeners become absorbed in what feels like an old-fashioned radio drama that is set in a future in which superheroes and regular folks live side by side. The narrators [Dan Bittner and Rebecca Soler] excel in portraying the two protagonists...In addition, Bittner and Soler keep the large cast of secondary characters sorted out so well that it seems like there are way more than two narrators." -AudioFile