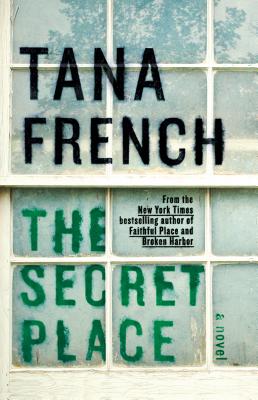 By Tana French
Email or call for price.
Out of Print - Not Available

Tana French has a cult following, and for a good reason. She offers up totally unique stories while still staying true to the detective murder mystery genre. If you're new to her work, this is a great place to start. If you're not, why haven't you read this yet?!?!

The sensational new novel from "one of the most talented crime writers alive" ("The Washington Post")
The photo on the card shows a boy who was found murdered, a year ago, on the grounds of a girls' boarding school in the leafy suburbs of Dublin. The caption saysI KNOW WHO KILLED HIM.
Detective Stephen Moran has been waiting for his chance to get a foot in the door of Dublin's Murder Squad--and one morning, sixteen-year-old Holly Mackey brings him this photo. "The Secret Place," a board where the girls at St. Kilda's School can pin up their secrets anonymously, is normally a mishmash of gossip and covert cruelty, but today someone has used it to reignite the stalled investigation into the murder of handsome, popular Chris Harper. Stephen joins forces with the abrasive Detective Antoinette Conway to find out who and why.
But everything they discover leads them back to Holly's close-knit group of friends and their fierce enemies, a rival clique--and to the tangled web of relationships
that bound all the girls to Chris Harper. Every step in their direction turns up the pressure. Antoinette Conway is already suspicious of Stephen's links to the Mackey family. St. Kilda's will go a long way to keep murder outside their walls. Holly's father, Detective Frank Mackey, is circling, ready to pounce if any of the new evidence points toward his daughter. And the private underworld of teenage girls can be more mysterious and more dangerous than either of the detectives imagined.
"The Secret Place" is a powerful, haunting exploration of friendship and loyalty, and a gripping addition to the Dublin Murder Squad series.

Tana French grew up in Ireland, Italy, the United States, and Malawi. She is the author of "In the Woods" (winner of the Edgar, Anthony, Macavity, and Barry awards), "The

Likeness, Faithful Place "and "Broken Harbor" (winner of the Los Angeles Times prize for Best Mystery/Thriller). She lives in Dublin with her husband and two children.