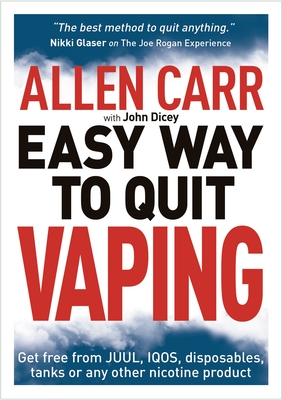 Allen Carr's Easyway is a global phenomenon - a clinically proven and 100% drug-free treatment for nicotine addiction. First used as an internationally renowned and incredibly successful stop-smoking method, this cutting-edge approach now addresses the fastest-growing nicotine delivery system in the world, vaping. The Easyway method tackles addiction from an entirely different angle. Rather than employing scare-tactics and enforcing painful restrictions on your vaping habits, it unravels the cognitive brainwashing behind your addictive behavior. In this way, it removes the desire to vape altogether without willpower or sacrifice. Whether you use e-cigarettes, JUUL, tanks or pens, or any kind of mod or pod, this method will work for you. All you have to do is read this book in its entirety, follow all of the instructions and you will be set free from your addiction to nicotine. - Does not rely on willpower, aids, substitutes, or gimmicks
- Works without unpleasant withdrawal symptoms
- Clinically proven to be AT LEAST as effective as UK health service's Gold Standard Stop Smoking Service. What people say about Allen Carr's Easyway method: Allen Carr's international bestseller...has helped countless people quit.
Time Out New York I read this book and quit smoking instantly
Nikki Glaser The Allen Carr program was nothing short of a miracle.
Anjelica Huston It was such a revelation that instantly I was freed from my addiction.
Sir Anthony Hopkins His skill is in removing the psychological dependence.
The Sunday Times

Allen Carr (1934-2006) was a chain-smoker for over 30 years. In 1983, after countless failed attempts to quit, he went from 100 cigarettes a day to zero without suffering withdrawal pangs, without using willpower and without gaining weight. He realized that he had discovered what the world had been waiting for - the Easy Way to Stop Smoking - and embarked on a mission to help cure the world's smokers. Easyway has grown to become a global phenomenon with seminar centers in 150+ cities in more than 50 countries around the world. Allen Carr's Easyway books, online video programmes, and live group seminars have helped an estimated 50 million smokers worldwide. A vast majority of those happy non-smokers became aware of the method as a result of personal recommendation from their friends, family, and colleagues. Allen Carr is now recognized as the world's leading expert on helping smokers to quit and has sold over 16 million books on the topic. His Easyway method has been successfully applied to a host of issues including weight control, alcohol and other addictions and fears.In 2006, Allen was diagnosed with lung cancer and passed away that November handing responsibility for Easyway over to his closest and most trusted colleagues. John Dicey is the Global Chief Executive Officer & Senior Therapist of Allen Carr's Easyway Worldwide. He was an 80 a day smoker and had tried many times to quit - using every method he could find. Nothing worked. In 1997 he attended Allen Carr's clinic in London and to his surprise he became a happy non-smoker. He trained and worked in the hotel & catering industry for 15 years before being bowled over with his enthusiasm and passion for Allen's life-changing method. He sold his business interests in the hospitality industry when he joined Allen Carr in 1998. Under Allen Carr's supervision he underwent the rigorous training process required to become an Allen Carr's Easyway Therapist and took over the operation of Allen's original London Centre where he went on to personally treat more than 30,000 smokers face to face. He went on to expand the UK seminar center network and the international franchise and publishing network, and worked closely with Allen to apply his Easyway method to a host of other addictions and issues. Appointed to Allen Carr's board in 2004, John reluctantly allows himself to be described as co-author of Allen's books - but delights in deflecting all the praise and acclaim for them straight back on the great man himself; it's ALL Allen Carr. He has been instrumental in the co-authorship, creation, & editing of many of Allen Carr's books, ebooks and audio titles including Quit Smoking Boot Camp, Allen Carr's Easyway to Quit Smoking, Stop Drinking Now, Good Sugar Bad Sugar, Easyway to Stop Gambling, Get out of Debt, Smart Phone Dumb Phone (Tech and Digital addiction), and Easyway to Quit Emotional Eating as well as having written and developed online video program for Stop Smoking, Stop Drinking, Weight Loss & Sugar Addiction, Enjoy Flying, Stop Gambling, Quit Caffeine, Get out of Debt, Quit Cocaine, Smart Phone, Dumb Phone (tech addiction), Quit Vaping, and Quit Cannabis. John lives in the London suburbs with his wife Jackie, and children Emily & Harry.