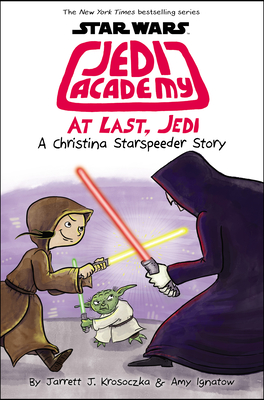 This is book number 9 in the Star Wars: Jedi Academy series.

AMY IGNATOW is the author and illustrator of The Popularity Papers series and The Mighty Odds, the first book in the Odds series. The first book in The Popularity Papers series was selected as a top-ten title for 2011 by the American Library Association's Rainbow Project, was a 2010 Gold Award winner by the National Parenting Publications Association, and was selected by the Chicago Public Library as one of the 2011 "Best of the Best" books. Amy lives in Philadelphia with her family, eight fish, and a cat named Dr. Josephine Frimplepants.

Jarrett J. Krosoczka is a New York Times bestselling author, a two-time winner of the Children's Choice Book Award for the Third to Fourth Grade Book of the Year, an Eisner award nominee, and the author and/or illustrator of more than 30 books for young readers. His critically acclaimed graphic novel memoir Hey, Kiddo was a National Book Award Finalist. His work includes several picture books, select volumes of Star Wars: Jedi Academy, the Lunch Lady graphic novels, and the Platypus Police Squad novel series. Jarrett has given two TED Talks, both of which have been curated to the main page of TED.com and have collectively accrued more than two million views online. He is also the host of The Book Report with JJK on SiriusXM's Kids Place Live, a weekly segment celebrating books, authors, and reading. Jarrett lives in Western Massachusetts with his wife and children, and their pugs, Ralph and Frank.