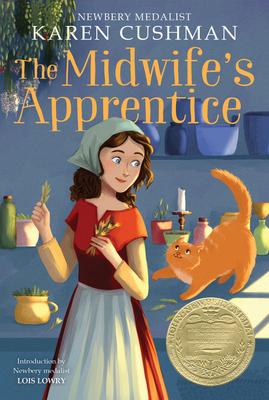 A poor girl in medieval England gains a name, a purpose, and a future in this “delightful”* and beloved Newbery Medal-winning book. Now with a new cover!

A girl known only as Brat has no family, no home, and no future until she meets Jane the Midwife and becomes her apprentice. As she helps the short-tempered Jane deliver babies, Brat—who renames herself Alyce—gains knowledge, confidence, and the courage to want something in life for the first time. Introduction by Lois Lowry.

Karen Cushman's acclaimed historical novels include Catherine, Called Birdy, a Newbery Honor winner, and The Midwife's Apprentice, which received the Newbery Medal. She lives on Vashon Island in Washington State. Visit her online at karencushman.com and on Twitter @cushmanbooks.

"With simplicity, wit, and humor, Cushman presents another tale of medieval England. Here readers follow the satisfying, literal and figurative journey of a homeless, nameless child called Brat. . . . Earthy humor, the foibles of humans both high and low, and a fascinating mix of superstition and genuinely helpful herbal remedies attached to childbirth make this a truly delightful introduction to a world seldom seen in children’s literature." — School Library Journal (starred review)

"This novel is about a strong, young woman in medieval England who finds her own way home. . . . Kids will be caught up in this short, fast-paced narrative about a hero who discovers that she’s not ugly or stupid or alone."
— Booklist (starred review)