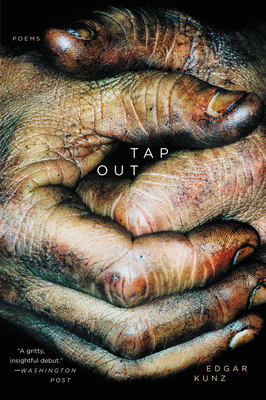 On Our Shelves Now

Winner of the 2019 Julia Ward Howe Award for Poetry

Approach these poems as short stories, plainspoken lyric essays, controlled arcs of a bildungsroman, then again as narrative verse. Tap Out, Edgar Kunz’s debut collection, reckons with his working‑poor heritage. Within are poignant, troubling portraits of blue‑collar lives, mental health in contemporary America, and what is conveyed and passed on through touch and words―violent, or simply absent.

Yet Kunz’s verses are unsentimental, visceral, sprawling between oxys and Bitcoin, crossing the country restlessly. They grapple with the shame and guilt of choosing to leave the culture Kunz was born and raised in, the identity crises caused by class mobility. They pull the reader close, alternating fierce whispers and proud shouts about what working hands are capable of and the different ways a mind and body can leave a life they can no longer endure. This hungry new voice asks: after you make the choice to leave, what is left behind, what can you make of it, and at what cost?

Edgar Kunz is the author of Tap Out, a New York Times "New & Noteworthy" pick. His writing has been supported by fellowships and awards from the National Endowment for the Arts, MacDowell, Vanderbilt University, and Stanford University, where he was a Wallace Stegner Fellow. His poems appear widely, including inThe New Yorker, The Atlantic, and Poetry. He lives in Baltimore and teaches at Goucher College.

Winner of the 2019 Nautilus Book Gold Award for Poetry —

“A whirlwind debut. Stories of sclerotic lives told in wrought images, Kunz arrives with real poetic talent…[he] pulls us into his poems and keeps us there through crisp detail…(A hint: trust poets who show back to you the images you’ve seen in glimpses and tucked in the back of your mind.)…Tap Out lives in a bittersweet world, and does so well, but there’s also fine touches here: a mother who has had enough, a son who sees beauty in loss…” — Nick Ripatrazone, The Millions, “Must Read Poetry”

“This powerful collection reads like an elegy and a confession, like a slap to the face followed by a plaintive kiss, like watching bad things happen and knowing that you’re complicit. Yet cutting through every one of these essential poems is a gritty, naturalistic beauty that makes me want to read them again and again. Tap Out is a gem, and Edgar Kunz is a major talent.”  — Andre Dubus III, author of Gone So Long and Townie

“These poems have a pervasive physicality that is both rewarding and horrifying…Arresting imagery, unexpected detail, brilliant use of tensions, a flowing rhythm and overall accessibility make this a collection to be read and re-read. Tap Out superbly mines the beauty, brutality, tensions and contradictions of working-class U.S. communities.” — Shelf Awareness

"There is no ground of existence that does not require...its poet. This proposition, requiring continual re-proving, has found again its confirmation in Edgar Kunz’s first book. In the lineage of Levine, Jordan, and Laux, Tap Out presents the data of blows received and taken in fully. Yet these poems do not return blow for blow; they offer instead an unflinching, continued allegiance to abiding connection. Without summation or comment, they remind us that all alchemies of being are possible. Kunz’s precision-tool language of memory and witness enlarges, pivots, pieces together the broken into a world made new, survivable, holdable, forgiven.”  — Jane Hirshfield, author of The Beauty and Come, Thief

"Kunz’s debut collection is a hard-hitting journey through tightly crafted poems that capture a culture on the edge of an abyss. Kunz’s work is haunted by ghosts, some long-gone, others still wandering the corridors of memory...Kunz's solid and rewarding first book reminds us that in the battle to survive and to live, a poetic light can shine through." — Booklist

"Kunz crafts a poetics of disappointment and consolation...[the] poems are sparse and accessible, reminiscent of Hemingway in both content and style, and feature an extraordinary new voice that draws its energy from an underrepresented perspective."  — Publishers Weekly, starred review

“The sustained lyricism of these poems is all the more powerful for being burned at the edges by memory, by grief, by regret. In terms of craft, this poetry creates a world where human action reaches language the way gravity bends starlight: in a drama of weight and light. This is a hard-pressed place, a territory of failed relationships and regions that never becomes landscape. As its reporter, Edgar Kunz lives up to its challenges and understands its limits. This is a wonderful first book, memorable and unsettling.”  — Eavan Boland, author of A Woman Without a Country

"Kunz will eschew observation’s safe distance, and will instead zoom in closely...[The] ability...to transmogrify a familiar phrase or word into something unknown stands as one of Kunz’s major talents. The poems grow up with their poet...refuse simplistic renderings of complicated dynamics...and opt instead for a vulnerability."  — On the Seawall

“Tap Out is an ardent and gorgeous refusal to scorn the aches and wounds that bring us closer to mercy. Rippling with both sorrow and wonder, Edgar Kunz’s narratives sift through the intricacies of masculinity, working-class lives, and abandonment. The telling isn’t singed with nostalgia that obscures pain: his muscular lines make visible the scars that tether the self to hurt, to hope. The language is deftly scored on the page—the diction itself is revelatory. ShopRite. Larch. Chamber-throat. This book reminds us the heart has its own intelligence.”  — Eduardo C. Corral, author of Slow Lightning

“Edgar Kunz extends the legacy of James Wright and Philip Levine in these gutsy, tough-minded, working-class poems of memory and initiation. Tap Out is a marvelous debut, a well-made and harrowing book.”  — Edward Hirsch, author of Gabriel and A Poet’s Glossary