The Ballad of Black Tom (Hardcover) 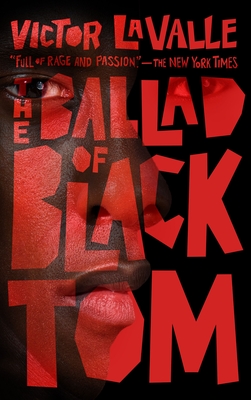 People move to New York looking for magic and nothing will convince them it isn't there.

Charles Thomas Tester hustles to put food on the table, keep the roof over his father's head, from Harlem to Flushing Meadows to Red Hook. He knows what magic a suit can cast, the invisibility a guitar case can provide, and the curse written on his skin that attracts the eye of wealthy white folks and their cops. But when he delivers an occult tome to a reclusive sorceress in the heart of Queens, Tom opens a door to a deeper realm of magic and earns the attention of things best left sleeping.

A storm that might swallow the world is building in Brooklyn. Will Black Tom live to see it break?

Victor LaValle is the author of more than ten works of fiction and graphic novels, including the multi-award-winning novel, The Changeling. His books have won the World Fantasy Award, British Fantasy Award, Bram Stoker Award, Dragon Award, and the Shirley Jackson Award, among many others. He has been a finalist for the Hugo and Nebula Awards. He has been the recipient of a Guggenheim Fellowship, Whiting Writers Award, and the Key to Southeast Queens. He teaches writing at Columbia University and lives with his wife and kids in the Bronx.

“This ingenious recasting of an H.P. Lovecraft classic is as creepy as it is thought-provoking.”—People

“The Ballad of Black Tom stands on its own as a compelling weird tale of Jazz-age New York City, but its penetrating examination of Lovecraft’s creations and how they reflect racism’s profound influence on our cultural imagination is where it really shines.”—Slate

“Wonderfully creepy and impossible to put down, The Ballad of Black Tom is a genre-bending must-read.”—BuzzFeed

“Whether The Ballad of Black Tom is approached as a straightforward tale of horror in the early 20th century or as a metafictional commentary on Lovecraft’s own storytelling choices and racism, it succeeds. It also stands as proof that the process of engaging with the conflicted feelings that the work of Lovecraft can prompt can lead to rewarding, emotionally compelling writing of its own.”—Electric Literature