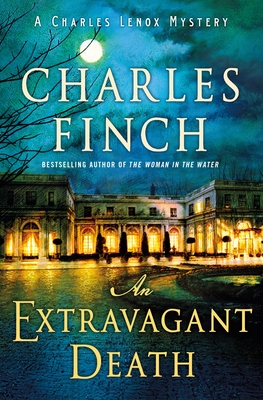 This is book number 14 in the Charles Lenox Mysteries series.

In what promises to be a breakout in Charles Finch's bestselling series, Charles Lenox travels to the New York and Newport of the dawning Gilded Age to investigate the death of a beautiful socialite.

London, 1878. With faith in Scotland Yard shattered after a damning corruption investigation, Charles Lenox's detective agency is rapidly expanding. The gentleman sleuth has all the work he can handle, two children, and an intriguing new murder case.

But when Prime Minister Benjamin Disraeli offers him the opportunity to undertake a diplomatic mission for the Queen, Lenox welcomes the chance to satisfy an unfulfilled yearning: to travel to America. Arriving in New York, he begins to receive introductions into both its old Knickerbocker society and its new robber baron splendor. Then, a shock: the death of the season's most beautiful debutante, who appears to have thrown herself from a cliff. Or was it murder? Lenox’s reputation has preceded him to the States, and he is summoned to a magnificent Newport mansion to investigate the mysterious death. What ensues is a fiendish game of cat and mouse.

Witty, complex, and tender, An Extravagant Death is Charles Finch's triumphant return to the main storyline of his beloved Charles Lenox series—a devilish mystery, a social drama, and an unforgettable first trip for an Englishman coming to America.

“The novelty of bringing Lenox to America works well... Using actual historical figures as characters, Finch does justice to the nouveau dazzle of Newport, and writes with Wharton-worthy acuteness about the horse-trading of marriageable young women.” –Airmail

“Lenox’s latest adventure has humanity, heart, and humor; it offers a captivating glimpse of America’s richest citizens in the late 1800s; it delivers a gripping and cleverly plotted mystery; and, of course, Lenox remains a thoroughly charming lead character. A pleasure to read on every level.” –Booklist (starred review)

"A solid historical mystery that will change its hero’s mind about life and death." —Kirkus Reviews

Praise for The Last Passenger:

“Smashing...That’s the charm of Finch’s style and [Lenox’s] own manner of sleuthing — a brilliant display of brainy deduction...classy writing and beguiling details.” —The New York Times Book Review

"No mystery writer except perhaps Anne Perry is as successful as Charles Finch at evoking the atmosphere of Victorian London." —The Washington Post

“Finch smoothly integrates the era’s politics, fashion, culture and views, including how American issues have infiltrated British society. [He] also cleverly delves into Lenox’s personality, which has fueled this beloved series.” —Florida Sun-Sentinel

“Finch outdoes himself in the latest Charles Lenox mystery…[he] superbly weaves facts, interesting historical tidbits and emotions in a book so rich one hates to see it end.” —Cleveland Plain-Dealer

"Finch’s plotting is excellent, his characters well developed, but it is his prose that truly shines. He evokes the writing style of 19th-century English authors—Wilkie Collins jumps to mind—lending a degree of authenticity to the narrative found in comparatively few historical novels. Finch also incorporates then-contemporary international politics, especially the burgeoning abolitionist movement in the U.S., in this exceptional and atmospheric mystery." —Bookpage

“Avid mystery readers will enjoy Lenox’s thorough review of his sleuthing process…choose this if you revel in atmosphere.” —Kirkus Reviews

“This tightly plotted mystery…is rich in historical detail…[Lenox] coming into his own as a detective is a delight.” —Booklist

"Finch effectively integrates the politics of the time, including pre–Civil War tensions in America... a clever murder puzzle. Anne Perry and David Dickinson fans will be satisfied." —Publishers Weekly