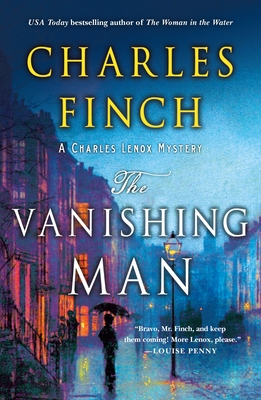 This is book number 12 in the Charles Lenox Mysteries series.

From the critically acclaimed and USA Today bestselling author Charles Finch comes The Vanishing Man, a prequel to his Charles Lenox Victorian series, in which the theft of an antique painting sends Detective Lenox on a hunt for a criminal mastermind.

London, 1853: Having earned some renown by solving a case that baffled Scotland Yard, young Charles Lenox is called upon by the Duke of Dorset, one of England’s most revered noblemen, for help. A painting of the Duke’s great-grandfather has been stolen from his private study. But the Duke’s concern is not for his ancestor’s portrait; hiding in plain sight nearby is another painting of infinitely more value, one that holds the key to one of the country’s most famous and best-kept secrets.

Dorset believes the thieves took the wrong painting and may return when they realize their error—and when his fears result in murder, Lenox must act quickly to unravel the mystery behind both paintings before tragedy can strike again. As the Dorset family closes ranks to protect its reputation, Lenox uncovers a dark secret that could expose them to unimaginable scandal—and reveals the existence of an artifact, priceless beyond measure, for which the family is willing to risk anything to keep hidden.

In this intricately plotted prequel to the Charles Lenox mysteries, the young detective risks his potential career—and his reputation in high society—as he hunts for a criminal mastermind.

Praise for The Vanishing Man:

"Rich in period minutiae...unveils the frightening power of the uppermost classes." —Kirkus Reviews

Praise for The Woman in the Water:

“Finch does a wonderful job of re-creating the atmosphere of mid-19th-century England; his characters are crisply drawn and believable. It’s wonderful to see the neophyte Lenox develop the skills for which he becomes renowned in later books. An excellent addition to an already terrific series.” —Library Journal (starred)

“With its splendidly drawn characters and brisk, supple prose, this can be either an inviting introduction to those new to Finch’s accomplished series or a winning addition to the canon for established fans.” —Booklist (starred)

“Lenox has officially reached the big leagues—the conclusion waiting for him is nothing short of chilling. A case with enough momentum to recharge this series and grab new readers with its pull.” —Kirkus Reviews