The Rapture of the Nerds: A Novel (Paperback) 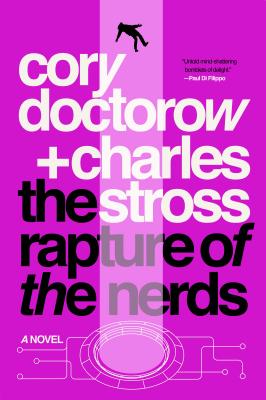 By Cory Doctorow, Charles Stross
$17.99
Email or call for price.

A brilliant collaboartion from Cory Doctorow and Charles Stross, two defining personalities of post-cyberpunk SF—now repackaged with a new cover!

Welcome to the fractured future, at the dusk of the twenty-first century.

Earth has a population of roughly a billion hominids. For the most part, they are happy with their lot, living in a preserve at the bottom of a gravity well. Those who are unhappy have emigrated, joining one or another of the swarming densethinker clades that fog the inner solar system with a dust of molecular machinery so thick that it obscures the sun.

The splintery metaconsciousness of the solar-system has largely sworn off its pre-post-human cousins dirtside, but its minds sometimes wander…and when that happens, it casually spams Earth's networks with plans for cataclysmically disruptive technologies that emulsify whole industries, cultures, and spiritual systems. A sane species would ignore these get-evolved-quick schemes, but there's always someone who'll take a bite from the forbidden apple.

So until the overminds bore of stirring Earth's anthill, there's Tech Jury Service: random humans, selected arbitrarily, charged with assessing dozens of new inventions and ruling on whether to let them loose. Young Huw, a technophobic, misanthropic Welshman, has been selected for the latest jury, a task he does his best to perform despite an itchy technovirus, the apathy of the proletariat, and a couple of truly awful moments on bathroom floors.

Cory Doctorow is a regular contributor to the Guardian, Locus, and many other publications. He is a special consultant to the Electronic Frontier Foundation, an MIT Media Lab Research Associate and a visiting professor of Computer Science at the Open University. His award-winning novel Little Brother and its sequel Homeland were a New York Times bestsellers. His novella collection Radicalized was a CBC Best Fiction of 2019 selection. Born and raised in Canada, he lives in Los Angeles.

CHARLES STROSS is a full-time science fiction writer and resident of Edinburgh, Scotland. He has won three Hugo Awards for Best Novella, including for the Laundry Files tale “Equoid.” His work has been translated into over twelve languages. His novels include the bestselling Merchant Princes series, the Laundry series (including Locus Award finalist The Dilirium Brief), and several stand-alones including Glasshouse, Accelerando, and Saturn's Children.

Like many writers, Stross has had a variety of careers, occupations, and job-shaped catastrophes, from pharmacist (he quit after the second police stakeout) to first code monkey on the team of a successful dot-com startup (with brilliant timing, he tried to change employers just as the bubble burst) to technical writer and prolific journalist covering the IT industry. Along the way he collected degrees in pharmacy and computer science, making him the world’s first officially qualified cyberpunk writer.

“There's a superhuman energy and intelligence to Makers that I haven't see since mid-period Bruce Sterling.” —Lev Grossman, New York Times bestselling author of The Magicians

“If imagination is the key to success for a writer, Charles Stross has it in spades.” —The Times (London)