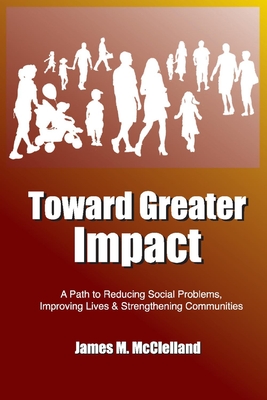 Many major social problems – poverty, low education levels, crime, and a host of health issues, including alcohol and substance use disorders – are frequently interrelated and often reinforce and compound each other. Yet, in the U.S. we tend to treat those problems individually in isolation from the others. The public sector often does this through large bureaucratic silos, while the not-for-profit sector – a large part of which focuses on alleviating social problems – is incredibly fragmented. While many good programs and services do exist, we have generally not done a good job connecting them. We tend to be program-rich and systems-poor, and siloed and fragmented approaches to complex problems frequently fail to result in lasting impact.

In Toward Greater Impact, author Jim McClelland draws on decades of first-hand experiences and describes a path to connect some of the many good programs and services that do exist in a more holistic, often whole family approach that can help reduce a variety of social problems, improve lives, and make more effective use of existing resources.

In 2015 Jim McClelland concluded a 45-year career as an executive with Goodwill Industries. Forty-one of those years were as CEO of one of the largest and most diversified Goodwill organizations in the country, based in Indianapolis. Following his Goodwill career, he served three years as Executive Director for Drug Prevention, Treatment, and Enforcement for the State of Indiana.

After earning a bachelor's degree in Industrial Engineering from Georgia Tech, Jim lived in Washington D.C. in the late 1960s. While there, he had several volunteer experiences, all of them connected with the church he attended, that prompted him to seek a way to use his IE skills in a service organization. That search led to his joining Goodwill Industries in Houston in 1970. Three years later he was named President and CEO of Goodwill Industries of Central Indiana, based in Indianapolis. Over the next 41 years the organization experienced substantial growth - from 558 to more than 3,200 employees, two-thirds of whom had limited options because of disability, felony record, or lack of a high school diploma. Annual revenues increased from $3 million to $130 million. But far more important than the growth was how the organization evolved to increase its impact in the lives of people and communities.

During the last decade of Jim's career, Goodwill became heavily involved in efforts to raise education attainment levels and reduce multigenerational poverty. In 2010 the organization created a unique diploma-granting high school, The Excel Center, designed for older youth and adults who had previously dropped out. Responding to strong demand, Goodwill opened nine more Excel Centers in Indiana before Jim retired and also began licensing the model to organizations in other states. By 2020 there were 31 Excel Centers across five states and the District of Columbia.

In 2011 Goodwill began implementing Nurse-Family Partnership, a home visitation program for first-time mothers in low income households, and developed a means of linking health, education, and employment services to help individuals and families move out of poverty. Jim views this kind of holistic, often whole family approach to serving people as a key to substantially reducing multigenerational poverty and other related social problems.

In 2017, following a short period of retirement, Indiana Governor Eric Holcomb asked Jim to help lead the state's response to the opioid crisis. As Indiana's first drug czar, he worked full-time for three years helping to coordinate the relevant resources of numerous state agencies that affect substance abuse issues. He also helped develop relationships to leverage the state's resources with those of other sectors, including business, education, and health care; local governments, law enforcement agencies, and the courts; and philanthropies, faith-based and community-based organizations to reduce substance abuse in Indiana.

Jim has served on the boards of numerous not-for-profit organizations at local, national, and international levels and chaired several of them. He was also heavily involved in helping develop Goodwill Industries in South Korea.

Among other honors, Jim has been inducted into the Central Indiana Business Hall of Fame, the Georgia Tech Engineering Hall of Fame, and the Goodwill Industries International Hall of Fame.

In addition to his degree from Georgia Tech, Jim earned an MBA from the Kelley School of Business at Indiana University. A native of Florida, he and his wife, Jane, live in Indianapolis.