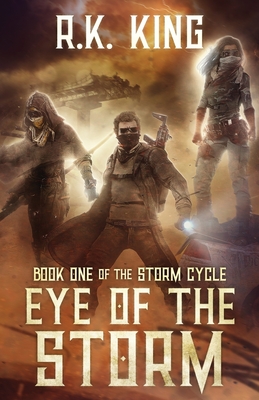 A stranger with a message.

A quest for the truth.

They are in for the fight of their lives.

Aiden is a Pathfinder, a survivor, clinging to a meager existence within the last habitable place on Earth; the Eye of the Storm. The Pathfinders battle other tribes over scrap and temporary land, always moving as the Eye moves.

But when the Pathfinders discover their haven may soon disappear, mere survival is no longer an option - until Aiden encounters a young woman who speaks a language he's never heard, but whose message he understands all too well; they consider it blasphemy, but there may be another place out there, beyond the Eye.

Who will win? Who will survive? This is the world of the Storm, where the only way out is through.

R.K. King began writing alone with his action figures. He'd create ongoing narratives starring those little plastic superheroes, mutant turtles and Force-Wielding space wizards. Those narratives would eventually be typed down once the household included an old macintosh computer, and a word processor to record those pint-sized adventures R.K. King lives in beautiful British Columbia with his wonderful wife and crazy cat (who keeps trying to type her own stories on his keyboard) He can be reached on social media via @RKKingWrites or his website www.rkkingwrites.com