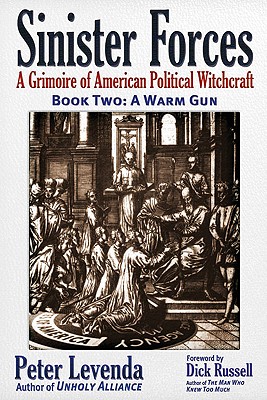 This is book number 2 in the Sinister Forces: A Grimoire of American Political Witchcraft (Paperback) series.

The roots of coincidence and conspiracy in American politics, crime, and culture are investigated in this second volume of a three-part set that exposes new connections between religion, political conspiracy, terrorism, and occultism. Not a work of speculative history, this exposé is founded on primary source material and historical documents and provides strange parallels between supernatural forces such as shaminism, ritual magic, and cult practices and contemporary interrogation techniques such as those used by the CIA under the general rubric of MK-ULTRA. Fascinating details on Nixon and the "Dark Tower," the Assassin cult and more recent Islamic terrorism, and the bizarre themes that run through American history from its discovery by Columbus to the political assassinations of the 1960s are revealed.

Peter Levenda has researched the material for this book over the course of 25 years, visiting more than 40 countries and gaining access to temples, prisons, military installations, and government documents. He is the author of The Secret Temple, Stairway to Heaven, and Unholy Alliance. He lives in Miami. Dick Russell is the author of Black Genius: And the American Experience, Eye of the Whale, and The Man Who Knew Too Much. He is a former staff writer at the Hollywood Bureau of TV Guide Magazine and a former staff reporter for Sports Illustrated. His articles have appeared in numerous publications, including Family Health and the Village Voice. He splits his time between Boston and Los Angeles.