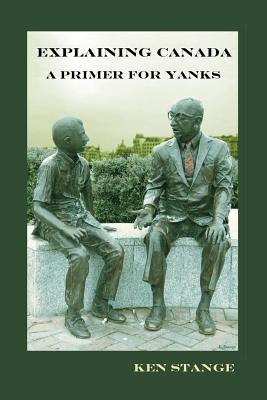 This is a humorous and satirical contemporary guide to Canada intended for both American and Canadian readership. It deals with the cultural differences between Canada and America, including the arts, politics, ethnicity, and attitudes. Of course nobody can really explain Canada. Americans might find some of the remarks about their country's idiosyncrasies annoying, just as Canadians might object to the description of Canada's quirks. The author justifies his perspective on the basis of having spent the first several decades of his life in The States and the remaining decades north of the border. His insights into the notable differences between these countries are only possible for an immigrant.

Ken Stange is a writer, but also a visual artist and Professor Emeritus at Nipissing University--where he still teaches a course on the Psychology of Art and Creativity. In 2012 he gave a TEDx talk entitled "Redefining Creativity". He was the founder and editor of Nebula Magazine from 1975 to 1984, and he currently edits the Internet reincarnation of Nebula. His works include poetry, fiction, arts journalism, scientific research reports, computer programs, philosophical essays, visual art, and a travel memoir. He has literally hundreds of periodical publications. In May 2011, he won the Exile/Vanderbilt Prize for Short Fiction by an established writer. He has published 14 books of poetry and fiction, and he calls all his books "hypotheses" because of his interest in the integration of the sciences and the arts. Recent books include God When He's Drunk (stories), Embracing The Moon: 25 Little Worlds (art and poetry), and Going Home: Cycling Through The Heart Of America (travel memoir). Explaining Canada: A Primer For Yanks is based on his observations of the differences between Canada and the States that he has observed since he immigrated to Canada as a young man.