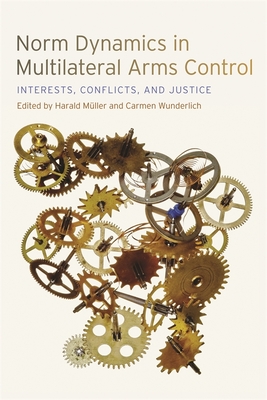 This volume comprehensively covers a range of issues related to dynamic norm change in the current major international arms control regimes related to nuclear, biological, and chemical weapons; small arms and light weapons; cluster munitions; and antipersonnel mines. Arms control policies of all of the key established and rising state actors are considered, as well as those of nonaligned countries, nongovernmental organizations, and international governing bodies.

Recent studies on multilateral arms control tend to focus mostly on "structure," by which opportunities and constraints for action are created. This volume pays equal attention to "agency," through which opportunities and constraints to produce change or maintain the status quo are handled. In addition-and in greater depth than in recent studies-the volume acknowledges the force of moral and ethical impulses (alongside such factors as political, legal, and technological change) in the evolution of arms control norms. The volume begins with a look at the structure of regimes, at the conflicts residing in these structures, and at the dynamic processes in which these conflicts are worked out. The impact of extrinsic factors on norm dynamics is considered next, including technological change and shifts in attitudes and power structures. Essays on the role of agency in driving norm change conclude the volume, with a particular focus on norm entrepreneurship and the importance of acknowledging the competing justice claims surrounding norm-change efforts. Contributors: Una Becker-Jakob, Alexis Below, Marco Fey, Giorgio Franceschini, Andrea Hellmann, Gregor Hofmann, Friederike Klinke, Daniel M ller, Harald M ller, Franziska Pl mmer, Carsten Rauch, Judith Reuter, Elvira Rosert, Annette Schaper, Hans-Joachim Schmidt, Tabea Seidler-Diekmann, Simone Wisotzki, Carmen Wunderlich.