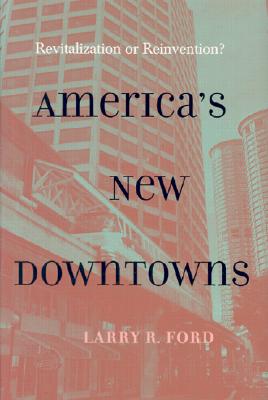 What makes a good downtown, and why? Are today's downtowns, with their waterfront parks, festival markets, sports arenas, and cultural centers, more vibrant and lively than the central business districts of the nineteenth and early twentieth centuries? Was there ever a golden age of downtowns? In this book, noted urban scholar Larry Ford casts a critical and practiced eye on sixteen contemporary urban centers to offer an expert's view of the best--and worst--of downtown America.

Ford begins with a brief history of U.S. urban development. He then explains his criteria for evaluating downtowns before proceeding with an on-the-street examination of the featured sixteen cities. Each is rated based on use of physical site, particularly for housing (unlike suburbs, Ford notes, most downtowns are located in challenging physical locales, such as harbors, rivers, hills, or peninsulas), street morphology, civic space, functional aspects (office space, retail stores, and convention centers), and the support districts in the fringe areas surrounding the downtown core. Ford concludes with a suggested model of downtown structure based upon the case studies and with a look at the possible effects of increasing globalization on the downtowns of the late twenty-first century. This book will appeal to those interested in urban studies, landscape studies, American studies, architecture, historic preservation and planning, and urban geography.

Larry R. Ford is a professor of geography at San Diego State University and has taught urban geography for thirty years. He is the author of Cities and Buildings: Skyscrapers, Skid Rows, and Suburbs and The Spaces between Buildings, both available from Johns Hopkins.