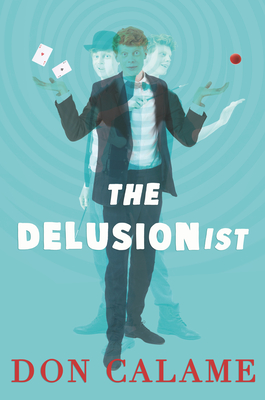 Quinn’s illusions are as good as those in any Vegas act—but can he win a spot at a prestigious magic camp despite an upstaging partner, a cute rival, and a con-artist mentor?

Fifteen-year-old Quinn Purcell wants only one thing: to win a coveted spot at the Masters of Magic Fantasy Camp. But the competition is stiff, including Dani Darling, an incredibly talented, and incredibly attractive, rival magician who prestidigitates her way into Quinn’s heart—unless that’s just another of her tricks. To make matters worse, Quinn and his best friend, Perry, have always performed their magic as a team, but the judges want solo acts, and a two-man audition might disqualify them. When Quinn meets his idol, the Dazzling Lazlo, at a diner, it seems like a sign. If he can convince Lazlo to spill the secrets to his greatest trick, then the spot at the camp is all but Quinn’s. But is the washed-up magician just using Quinn to run a few scams? When the chips are down, what will Quinn risk—his best friend, his new crush, or his career as a magician? Hilarious and fast-paced, Don Calame’s latest novel is full of complicated magic tricks and equally complicated friendships.

Don Calame is the author of the young adult novels Swim the Fly, Beat the Band, Call the Shots, and Dan Versus Nature. He is also an accomplished screenwriter who has worked with Marvel Studios, the Disney Channel, Lionsgate, Universal Studios, and Paramount Pictures. Don Calame was born in New York and now lives in British Columbia with his wife and their dog, Anna.

Calame convincingly conjures the combination of patter, misdirection, relentless practice, and elaborate preparation that makes the magic happen (and not just on stage).
—Kirkus Reviews

The teen's inner angst is balanced with a series of wacky, humorous events. . . Recommended for teens looking for a light read.
—School Library Journal

A funny story full of humour and quirky characters, magic tricks, and romance.
—The Calgary Herald