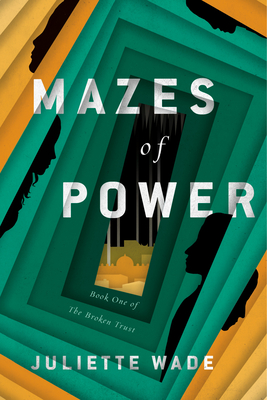 This is book number 1 in the The Broken Trust series.

Now in trade paperback, this debut work of sociological science fiction follows a deadly battle for succession, where brother is pitted against brother in a singular chance to win power and influence for their family.

The cavern city of Pelismara has stood for a thousand years. The Great Families of the nobility cling to the myths of their golden age while the city's technology wanes.

When a fever strikes, and the Eminence dies, seventeen-year-old Tagaret is pushed to represent his Family in the competition for Heir to the Throne. To win would give him the power to rescue his mother from his abusive father, and marry the girl he loves.

But the struggle for power distorts everything in this highly stratified society, and the fever is still loose among the inbred, susceptible nobles. Tagaret's sociopathic younger brother, Nekantor, is obsessed with their family's success. Nekantor is willing to exploit Tagaret, his mother, and her new servant Aloran to defeat their opponents.

Juliette Wade's habit of asking "why" about everything has led her to explore the world both above and below the ground. She has lived in Japan and France, and holds degrees in linguistics and anthropology. The author of many published short stories, she lives in the San Francisco Bay Area with her Aussie husband and her two sons, who support and inspire her.

"Mazes of Power is a gasp-inducing political Hunger Games packed with intrigue, assassins, and stunning social dynamics. I didn't want it to end!" —Beth Cato, author of Breath of Earth

"Mazes of Power is a taut, tense, wonderfully claustrophobic entry into a world and society brimming with surprises and secrets. Loved it and cannot wait for more!” —Julie E. Czerneda, author of The Web Shifter’s Library series

"Mazes of Power is one of those novels that redefines the genre. The storyline draws you in immediately, with characters that range from sympathetic to charming to downright terrifying in their insanity, but despite the initial, fairly conventional coming-of-age plot, this book dives fearlessly into darker questions.... With compassion and keen insight, not to mention the skill of a gifted storyteller, Wade has created Varin, a world without a sun, a society crumbling under the weight of its own survival, and characters desperate for power and for love…a world that will leave readers clamoring for more." —Deborah J. Ross, author of The Seven-Petaled Shield