A Series of Unfortunate Events #6: The Ersatz Elevator (Audio cassette) 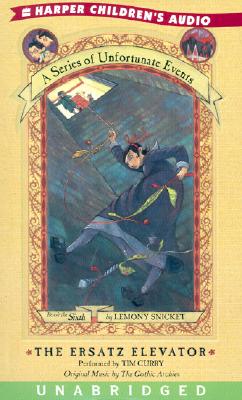 If you have just picked up this audio, then it is not too late to put it back down. Like the previous books in A Series of Unfortunate Events, there is nothing to be found in these pages but misery, despair, and discomfort, and you still have time to choose something else to read.

Within the chapters of this story, Violet, Klaus, and Sunny Baudelaire encounter a darkened staircase, a red herring, some friends in a dire situation, three mysterious initials, a liar with an evil scheme, a secret passageway, and parsley soda.

I have sworn to write down these tales of the Baudelaire orphans so the general public will know each terrible thing that has happened to them, but if you decide to read something else instead, you will save yourself from a heapful of horror and woe.