Myth and Measurement: The New Economics of the Minimum Wage - Twentieth-Anniversary Edition (Paperback) 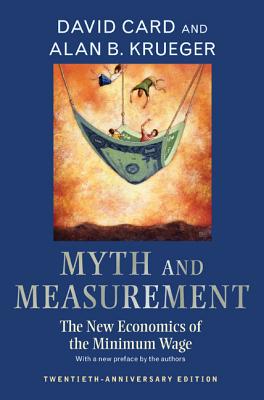 From David Card, winner of the Nobel Prize in Economics, and Alan Krueger, a provocative challenge to conventional wisdom about the minimum wage

David Card and Alan B. Krueger have already made national news with their pathbreaking research on the minimum wage. Here they present a powerful new challenge to the conventional view that higher minimum wages reduce jobs for low-wage workers. In a work that has important implications for public policy as well as for the direction of economic research, the authors put standard economic theory to the test, using data from a series of recent episodes, including the 1992 increase in New Jersey's minimum wage, the 1988 rise in California's minimum wage, and the 1990-91 increases in the federal minimum wage. In each case they present a battery of evidence showing that increases in the minimum wage lead to increases in pay, but no loss in jobs. A distinctive feature of Card and Krueger's research is the use of empirical methods borrowed from the natural sciences, including comparisons between the "treatment" and "control" groups formed when the minimum wage rises for some workers but not for others. In addition, the authors critically reexamine the previous literature on the minimum wage and find that it, too, lacks support for the claim that a higher minimum wage cuts jobs. Finally, the effects of the minimum wage on family earnings, poverty outcomes, and the stock market valuation of low-wage employers are documented. Overall, this book calls into question the standard model of the labor market that has dominated economists' thinking on the minimum wage. In addition, it will shift the terms of the debate on the minimum wage in Washington and in state legislatures throughout the country. With a new preface discussing new data, Myth and Measurement continues to shift the terms of the debate on the minimum wage.