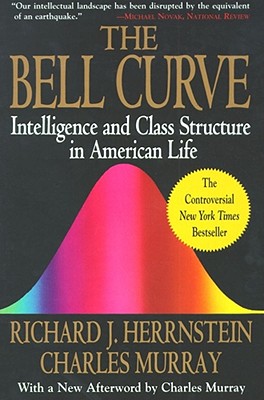 The controversial book linking intelligence to class and race in modern society, and what public policy can do to mitigate socioeconomic differences in IQ, birth rate, crime, fertility, welfare, and poverty.

Richard J. Herrnstein held the Edger Pierce Chair in Psychology at Harvard University until his death in 1994.

Michael Novak National Review Our intellectual landscape has been disrupted by the equivalent of an earthquake.

David Brooks The Wall Street Journal Has already kicked up more reaction than any social?science book this decade.

Peter Brimelow Forbes Long-awaited...massive, meticulous, minutely detailed, clear. Like Darwin's Origin of Species -- the intellectual event with which it is being seriously compared -- The Bell Curve offers a new synthesis of research...and a hypothesis of far-reaching explanatory power.

Milton Friedman This brilliant, original, objective, and lucidly written book will force you to rethink your biases and prejudices about the role that individual difference in intelligence plays in our economy, our policy, and our society.

Chester E. Finn, Jr. Commentary The Bell Curve's implications will be as profound for the beginning of the new century as Michael Harrington's discovery of "the other America" was for the final part of the old. Richard Herrnstein's bequest to us is a work of great value. Charles Murray's contribution goes on.

Prof. Thomas J. Bouchard Contemporary Psychology [The authors] have been cast as racists and elitists and The Bell Curve has been dismissed as pseudoscience....The book's message cannot be dismissed so easily. Herrnstein and Murray have written one of the most provocative social science books published in many years....This is a superbly written and exceedingly well documented book.

Christopher Caldwell American Spectator The Bell Curve is a comprehensive treatment of its subject,never mean-spirited or gloating. It gives a fair hearing to those who dissent scientifically from its propositions -- in fact, it bends over backward to be fair....Among the dozens of hostile articles that have thus far appeared, none has successfully refuted any of its science.

Malcolme W. Browne The New York Times Book Review Mr. Murray and Mr. Herrnstein write that "for the last 30 years, the concept of intelligence has been a pariah in the world of ideas," and that the time has come to rehabilitate rational discourse on the subject. It is hard to imagine a democratic society doing otherwise.

Prof. Eugene D. Genovese National Review Richard Herrnstein and Charles Murray might not feel at home with Daniel Patrick Moynihan and Lani Guinier, but they should....They have all [made] brave attempts to force a national debate on urgent matters that will not go away. And they have met the same fate. Once again, academia and the mass media are straining every muscle to suppress debate.

Prof. Earl Hunt American Scientist The first reactions to The Bell Curve were expressions of public outrage. In the second round of reaction, some commentators suggested that Herrnstein and Murray were merely bringing up facts that were well known in the scientific community, but perhaps best not discussed in public. A Papua New Guinea language has a term for this, Mokita. It means "truth that we all know, but agree not to talk about." ...There are fascinating questions here for those interested in the interactions between sociology, economics, anthropology and cognitive science. We do not have the answers yet. We may need them soon, for policy makers who rely on Mokita are flying blind.