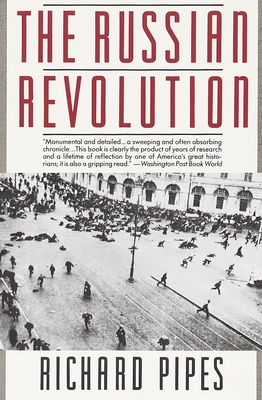 Mr. Pipes writes trenchantly, and at times superbly....No single volume known to me even begins to cater so adequately to those who want to discover what really happened to Russia....Nor do I know any other book better designed to help Soviet citizens to struggle out of the darkness."

Ground-breaking in its inclusiveness, enthralling in its narrative of a movement whose purpose, in the words of Leon Trotsky, was "to overthrow the world," The Russian Revolution draws conclusions that have already aroused great controversy in this country-and that are certain to be explosive when the book is published in the Soviet Union. Richard Pipes argues convincingly that the Russian Revolution was an intellectual, rather than a class, uprising; that it was steeped in terror from its very outset; and that it was not a revolution at all but a coup d'etat -- "the capture of governmental power by a small minority."

Richard Pipes was for many years a professor of history at Harvard University. He is the author of numerous books and essays on Russia, past and present, including Russia Under the Bolshevik Regime. In 1981–82 he served as President Reagan's National Security Council adviser on Soviet and East European affairs, and he has twice received a Guggenheim fellowship. He lives in Cambridge, Massachusetts, and Marlborough, New Hampshire.

"A monumental study...of absorbing interest [by] the distinguished historian of modern Russia ...Lucidly written, unsurpassed in detail and comprehensiveness."

"Mr. Pipes provides invaluable background to today's headlines....Few efforts have been made to create such a comprehensive work.... Pipes is a pathfinder."