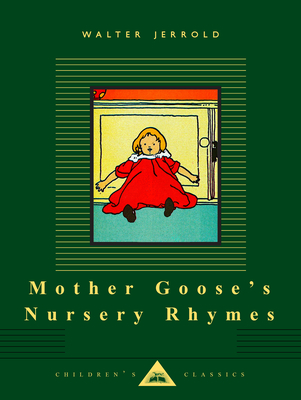 “Doctor Foster went to Glo’ster, In a shower of rain; He stepped in a puddle right up to his middle, And never went there again.” A bumper crop of nursery rhymes for the delight of the very young. In his Introduction, Jerrold explains how his selection was based on earlier collections made by John Newbery, Joseph Ritson and James Orchard Halliwell. He goes on to add, “ Students divide our rhymes into narrative pieces, historical folk-lore, game rhymes, counting-out rhymes, jingles, fragments, etcetera, but for the children for whom and by whom they are remembered, and for whom they are here collected and pictured anew, they are just — Nursery Rhymes.”

Walter Jerrold (1865-1929) was born in Liverpool but spent most of his life in London, where he followed a literary career. Starting work as a clerk in a newspaper counting-house, he went on to become deputy editor of The Observer. He edited many classic texts for the newly founded Everyman's Library, he wrote biographies, he produced stories for children under the name of Walter Copeland. In 1895 he married Clara Armstrong and his five daughters were obviously a ready audience and true inspiration for his bumper collection of nursery rhymes. While explaining that this was based on earlier collections made by John Newbery, Joseph Ritson, and James Orchard Halliwell, he admitted that 'Tradition in the nursery has acted as a severe editor . . .'

Charles Robinson (1870-1937) was apprenticed to a lithographer in London while also attending art school. In 1892 he was commissioned to illustrate R. L. Stevenson’s A Child’s Garden of Verses for The Bodley Head. The book’s success established him as a successful artist and he went on to illustrate more than a hundred books.