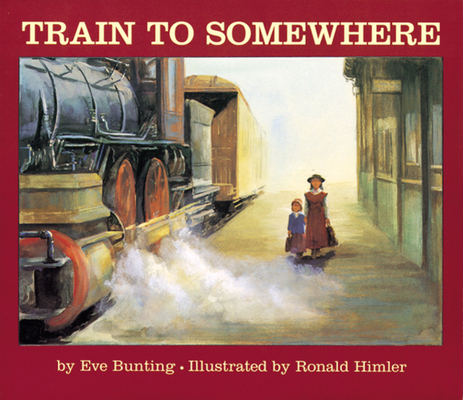 Marianne, heading west with fourteen other children on an Orphan Train, is sure her mother will show up at one of the stations along the way. When her mother left Marianne at the orphanage, hadn't she promised she'd come for her after making a new life in the West? Stop after stop goes by, and there's no sign of her mother in the crowds that come to look over the children. No one shows any interest in adopting shy, plain Marianne, either. But that's all right: She has to be free for her mother to claim her. Then the train pulls into its final stop, a town called Somewhere . . .

Eve Bunting has written over two hundred books for children, including the Caldecott Medal-winning Smoky Night, illustrated by David Diaz, The Wall, Fly Away Home, and Train to Somewhere. She lives in Southern California.

Ronald Himler is the award-winning illustrator of more than 75 books for children. He lives in the desert outside of Tuscon, Arizona. ronhimler.com

"A moving piece of Americana from a veteran team, introducing the orphan trains of the 19th and early 20th century to a picture-book audience. . . . A reminder that the good old days were not so idyllic; this book will have a place in the history curriculum, but it's also an involving read-aloud." Kirkus Reviews with Pointers

"The book is timely yet universal in showing the desire of every child for a loving family. Himler's full-page, bordered paintings portray the people and towns in warm colors and softly blended brush strokes. Beyond this gentle story lie the social issues of our own day." School Library Journal, Starred

"A heartbreaking picture book tells the story of the nineteenth-century Orphan Train in the voice of the plain girl nobody wants. Himler's beautiful, understated paintings show the train steaming across the prairie and the children trying to smile and look their best, hoping that someone will adopt them." Booklist, Editor's Choice —