Stronger: Courage, Hope, and Humor in My Life with John McCain (Hardcover) 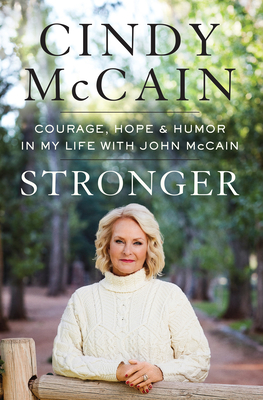 In Stronger, the widow of Senator John McCain opens up about her beloved husband, their thirty-eight-year marriage, and the trials and triumphs of a singular American life.

NAMED ONE OF THE BEST BOOKS OF THE YEAR BY NEW YORK POST • “At once a love letter to her late husband . . . and an indictment of the party-line politics he fought against . . . This is the Cindy McCain we suspected was at his side for so many years.”—Time

Cindy Hensley was just out of college when she met and fell in love with the celebrated Navy hero John McCain. They embarked on a thrilling life together that put her at the center of American politics for over four decades. Stronger, her moving and inspiring memoir, tells the story of her adventurous life with John for the first time.

Raising their four children in Arizona while John flourished as a six-term senator in Washington, D.C., Cindy McCain brought her own flair to the role of political wife. She eagerly supported John’s career even as she tried hard to stay out of the spotlight and maintain her own health and well-being. In Stronger, she is honest in revealing her own successes and missteps, discussing how she dealt with political attacks targeting her children, her battle with opioid addiction, and the wild whirl of campaigning for president.

As they built their life together, Cindy and John continued the multi-generation McCain tradition of service to country. With both immense pride and deep worry, she sent two sons off to active duty in the military. She describes her own brave efforts bringing medical support to countries in crisis and empowering women in Africa and around the world. And she reveals her feelings about the tumultuous effects of the Trump presidency on the military.

Most important, this book shares how John’s humor and strength helped Cindy grow into the confident woman she is now. More than a political story, Stronger is the unforgettable journey of one woman who believes in family, honor, and country—and is willing to stand up for all of them.

Cindy McCain is US Ambassador to United Nations Agencies for Food and Agriculture. She is Chairman Emeritus of the board of the McCain Institute for International Leadership. She was married to Senator John McCain for thirty-eight years. Prior to her appointment as Ambassador, she was chairman of her family business, Hensley Beverage Co. Cindy has a long history of giving a voice to the voiceless through her philanthropic and humanitarian work. Cindy and John raised four children together: Meghan, Jimmy, Jack, and Bridget. Cindy now travels extensively to raise awareness of human trafficking around the world, but her home base remains in Phoenix, Arizona.

“Cindy McCain shares her front row seat to the life and times of the late six-term senator [John McCain] in an account that makes it a worthwhile read.”—NPR

“There are a handful of great American families in politics that have risen to the rank of legend. The Kennedys and the Bushes, the Rockefellers and the Roosevelts. But perhaps no mythology has been nursed with such purpose and a sense of national service than that of the McCains—and not without good cause or true mission. . . . Cindy McCain’s memoir . . . is at once a love-letter to her late husband, who died of brain cancer in 2018, and an indictment of the party-line politics he fought against. It’s also a late cry for help in a political system that still expects spouses to be mute and insists successful women married to politicians defer to the men whose names are on ballots. . . . This is the Cindy McCain we suspected was at his side for so many years, but who chose to stay out of the political fray so as not to cause trouble for her husband. . . . Her writing is replete with the famed tales that make the McCain legend so compelling. . . . With this memoir, the still-committed Republican is signaling that the grit that defines the McCain brand in American political life and its mythology is still here.”—Time